My son and I took Cole on his first hunt this past weekend. It was a public land (LBL) youth hunt. Cole went with us last year on a turkey hunt and a deer hunt, just to tag along, but this was the first time he was the hunter. Cole is 12 and comes from a non huntin family.

Saturday mornin we set up on a long bottom field where turkeys frequent. Not much gobblin at daylight but about 30 minutes later we heard several up in the ridges. Some hens came into the field 300-400 yards away and picked around toward the end of the bay. About 8:30 we seen 2 big ole toms come out of the woods off the ridge and head across the field. They seen our decoys, looked hard at them for 10-15 minutes but went off toward the hens. We couldn't compete with the real thing.

The next mornin, Cole was set up where the turkeys crossed the field in a little clump of trees. At 7:30 a tom was gobblin back at the calls and headin his way. But before the tom could get there, a jake came from the other side of the field, seen the decoys and came on in. At 35 yards My son told him he's in range, take aim, and shoot when he was ready, don't rush it. Cole hammered him right then

You Can't Argue With A Sick Mind
Top

Congrats to you and Cole! Well done.

How did the tick spray work out
Top 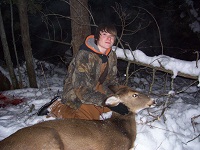 Congratulations on your hunt with Cole.
Top

AWESOME....... Congrats to the young hunter

How did the tick spray work out

Not one tick. Mosquitos wouldn't land on me either

We're goin back this Thursday / Friday for an adult hunt. Hope it keeps workin!
You Can't Argue With A Sick Mind
Top

Congrats to Cole, and thats very nice of you and your son to take him out hunting!!

Awesome!
You can take a Yooper out of the U.P., but you cant take the U.P. out of the Yooper. www.droptineproductions.net
Top

Very Nice. Tell Cole Congrats. I am glad you guys got him out, well done on that
Visit The Treestand Silencing Store
http://www.stealthoutdoors.com
Top
Post Reply
18 posts