New and looking for Advice

Discuss the science of figuring out our prey through good detective work.
Post Reply
First unread post • 6 posts • Page 1 of 1 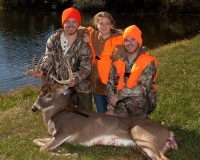 New and looking for Advice

Hello all, I am new this forum but have heard a lot of good things from people.

I just picked up permission on a new property (roughly 300 acres) in Northern Missouri. I have shed hunted this property a little bit to some success but have never walked the whole thing. Didn't find any big sheds but I have a decent feeling about the property; a farmer plants in the bottoms next to the river (corn this year) and there are a lot of wild plum trees on other browse scattered through out.

Anyways, I have recently started getting into learning more about speed scouting and using topo maps and the likes, but know there are people on here way more wise than myself. Between prepping food plots on my family property I don't have a ton of time to scout and set up many cams so I wanted to get other peoples opinions on this property.

Based on the maps below where would you:

1) Expect bedding areas might be
2) Look at placing tree stands (observation and actual hunting stands)
3) Think about placing a cam or two to try and gather an inventory (off the fields or in the woods?)

These maps are at scale of one another and I used the markers as reference points (Trails, field corners, property boundries, etc)

Thanks in advance for your thoughts and advice!
Top

Bagit, welcome to the BEAST! Congrats on the new property to hunt too.
Top

Thanks for the welcome! I was going to do a little scouting on the new property this past weekend but unfortunately my brassica plots on my family's 40 acre piece took precedent with the upcoming rains. I have a couple focus areas in mind but look forward to other viewpoints.
Top

Welcome Bagit! Be sure to check out the best tactical threads posted at the top of the DEER section. I highly suggest the DVDs or YouTube channel for learning.

I was curious if you live in MO?

I dont have alot of time to type all this so illhit you back later about it. Congrats on getting permission! The place looks amazing... #1 thing I would do first (if possible) is ask about past pressure and old stands.

I marked the map up for you but ill be honest bc of the far out zoom I cant say anything w confidence. But i wanted to give you a visual of what I see so that maybe you can apply it better. Ill say this also bc it looks so great I left the center portion un marked just bc the other spots are things I wanted to point out.
Orange - General Bedding Areas
Orange Lines - Possible Fence Row Bedding
Orange Dots - Hill Country Buck Bedding Example
Red - Tough Wind Conditions

I just wanted to point out before I have to log off - The orange dots are what I honed in for a good hill country buck bedding area example. As you can see by the dots he can have multiple wind shift locations while at the same time see down to the bottoms, wind the access trails or see the access trails. Your hunt is over before it even started.

The red looks like tough wind conditions so something to be aware of, however it looks really awesome to hunt and hold animals. Which is probably why they could be there in the first place bc if you setup at the bottom of those ravines, youre busted on both sides.

The orange lines - something im just diving into is farm bedding. Fence rows are great but if they hold alot of animal traffic they wont be. That strip of woods to the west looks good, especially for early season to bed where its cooler and get a drink or late after hes been pressured a bit maybe he gets pushed back over there off of the hills. They key is whether that canal is swimable for him to escape.
Top

Thanks for your input Darkknight54. I just recently bought a couple of the videos and are working through those. And to answer your question, yes I do live in MO.

A little back history on the property given some of your feedback/questions. Hunting pressure itself is minimal; the land owner has some city hunters come in during the opening week of gun season but outside of that week no one else has hunted the property in the last 4 years at least. He is allowing me to hunt up until November and then again after his hunters leave during gun season. There are a good number of stands that he has put up over the years for them but most of them are gun hunting set ups for the most part. One of the hiccups with the property is that he also hosts atv/utv rides out there several times a year during the spring/summer mostly and has a bunch of ppl pay to come out and ride. So there is that variable.

I went ahead and pulled some additional screen grabs zoomed in a little further as well. Starting from the North of the property and working down. In regards to the river it isn't very likely that the deer would be crossing that to get to the other side. Not because of the water level but the far side of the river is nearly a vertical 10+ foot drop from the ag fields on that side down to the river.
Last edited by DEERSLAYER on Sun Aug 13, 2017 3:41 pm, edited 1 time in total.
Reason: Pics deleted per bagit's request
Top
Post Reply
6 posts • Page 1 of 1