Is Iowa worth it for NR 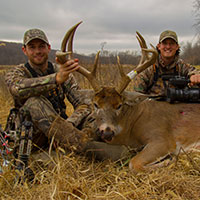 Re: Is Iowa worth it for NR

Thesouthpaw wrote:I intend to apply for a southern zone next year. I have plans to take an entire week off, which is not easily done as a teacher LOL. Anything I should expect coming from West Virginia? I typically hunt Indiana on 4-5 day hunts, and have had pretty good success with 130-140 class deer on small pieces of private/public. Waht are the chances of me running into something substantially bigger than that if I have a whole week in Iowa?

Lots of people love to hunt the rut (some swear by Halloween). From the last week of October to mid-November can be some entertaining time in the stand. When the small bucks get to running and chasing, never a dull moment. Though some of my best bucks have come later in the month of November, Thanksgiving week can be very good to see big bucks on their feet in daytime, out cruising for the rare doe coming into estrous. You won't see as much action late Nov, but quality of bucks could trend towards mature bucks. As a teacher, you might use less vacation coming out the week of Thanksgiving.

As an Iowa resident, and where I hunt, I'm happy to tag a 150" buck. Passing on one would probably leave the tag unfilled for the year, as it is rare to get a bigger buck (+150") under the stand over the course of the season.

I actually get the entire week of Thanksgiving off because it’s the first week of our rifle season here in WV (thank goodness I live in a district with lots of hunters). My plan is to come out early in November, then go back Thanksgiving week if I don’t kill one the first trip.

I echo what Ness said about late November. If forced to take 1 week only I'll take that period around Thanksgiving. 3 of my mature bowkills have been on Black Friday. Had 1 missed opportunity on Turkey day that still haunts me as well.
Not sure is sure id be passing true 150s and while a 130 isn't exactly common place there are plenty of them around

I would echo the same thing. If you are after a mature buck - the week leading up to and around Thanksgiving is a great time.

135” buck with a bow is a great deer on public land anywhere in the country. It’s probable you will see larger bucks on a week long trip but getting one to 20 yards is still difficult. That’s been my experience anyways.

Re: Is Iowa worth it for NR

Primetime41 wrote:I think I hunted the same zone as Dewey and my experience in Iowa was a bit different than his, but maybe it's because most of my hunts were in early November. Here are the days I hunted:

Pressure was hit-or-miss. I had a few days where there appeared to be just a few guys on the piece I was hunting that day. Other days it was more crowded.

I had three hunts where other guys were already setup within 30 yards of where I intended to hunt. On one of those occasions I was already up in the tree when 2 guys whistled at me from 25 yards away. I moved and they ended up shooting a big 8 pointer that night. On the morning I shot my buck I made sure I was the first truck in the parking lot and as I was about to start my walk another truck pulled in. They were planning to hunt the same spot I was. They politely moved on.

Anyway, expect some pressure. With that being said, there are a lot of nice bucks running around, especially in the 130" range, and I think that would be a good goal for a first-time non-resident hunter on public land with limited time (a week or so). I set a goal of killing a mature buck (4+), and I was able to do that. But in hindsight I think I was a bit naïve in my expectations. I passed a 3 year old 135-140 earlier in the season and I think I would shoot that caliber of buck if I were to go back. Unless I go to the southeast part of the state. Then I would up my standards quite a bit.

I intend to apply for a southern zone next year. I have plans to take an entire week off, which is not easily done as a teacher LOL. Anything I should expect coming from West Virginia? I typically hunt Indiana on 4-5 day hunts, and have had pretty good success with 130-140 class deer on small pieces of private/public. Waht are the chances of me running into something substantially bigger than that if I have a whole week in Iowa?

It's hard to say "chances are good", when most hunters never run into a 150+ deer on public. BUT, southeast Iowa is likely the best place to do it. And if you're getting on 130-140 class deer in IN or WV, you should do very well.

Neither of us can take off for a week straight due to our jobs, so we chose a zone closer to home. If we could do a full week we would've gone to a southern zone for sure.
Top
Post Reply
47 posts