Congrats! Shoot whatever makes you happy! Nothing wrong and everything right about getting meat from the woods.

Thanks for the kind words Dave, Zach, Shad, John, H_dad, and Dewey

crankn101 wrote:Now you need to shoot one right from the parking lot.

Now this got me thinking, I do have my eye on two other spots close to the parking lot, that I don't think anyone hunts. A pop up blind in the back of the pickup might be the way to go, nah, I would rather drag them at least a half mile.

I definitely feel like I hit a reset button. When I found dan and his tactics back in 08, I was a bit younger, and although I was starting to get good at killing deer, nothing big ever found itself in front of me Oh, except a monster doe she weighed 246 dressed after hanging for 3 weeks, anyway, I started to graduate from spikes, and 5 points, and does, to some basket racks, and even a few 3.5 year olds. But the last 5 years I had to take care of business in the falls and my hunting, especially archery hunting suffered. So I would go on my annual rifle hunt with the group up in the Huron National Forest, and put a ton of pressure on myself to get a decent buck. I have walked down a few average to decent bucks up there, but again nothing big. So getting something down early not only took a little pressure off, but almost feels like a reset as well since it was so dinky. Maybe that is the same, but definitely nowhere to go but up from here.

I would like to get another doe, then I think I am going to start disecting this little piece and do some buck hunting. The ground attack really is my in season scouting. Always looking for a treestand set or ambush spot, even though I rarely hunt the same spot twice. I have a good friend that says the same thing every year, " I just want to shoot a nice buck this year", and I say the same thing -Who doesn't. Funny thing is he scouts and hunts less than me. He is always holding out, and passing little bucks. I mention this because I know a lot of people that come here and refuse to shoot smaller bucks, pass on does, say how many they could've shot and eat a pile of tags. I just think that deer are not an endangered species, killing and eating deer is natural, and sometimes putting pressure on yourself takes the fun out of it.

Now don't get me wrong, we have a ton of elite hunters on this site that shoot giants every year, sometimes multiples, they make it look easy. I am not suggesting that Andy May go shoot a button to hit a reset, even though he would be like the millionaire who you could take it all away from and they would just go out and make several more million. I am suggesting to anyone who has been hunting 10 years or less and puts a ton of pressure on themselves for a public land slob and eats way too many tags to just do it, go shoot a stinking deer, pull that tag out of your pocket and notch it and attach it, field dress, drag, hang, skin, butcher. Then go do it all over again (unless you live in a one deer state). 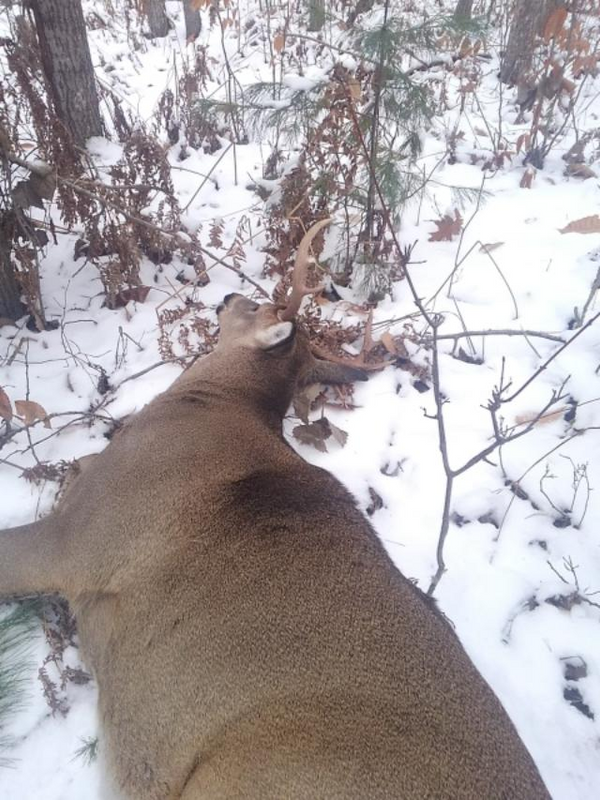 Tsom wrote:Congrats! Shoot whatever makes you happy! Nothing wrong and everything right about getting meat from the woods.

My favorite part is the squirrel hitting with a thunk. Good eats and a legal tag, you can't ask for much more than that.
http://www.iowawhitetail.com
Leading the way for habitat and management information

nice work Lou, thanks for sharing!!
“The master has failed more times than the beginner has even tried.”
Top

sPECTACULAR JOB YOU sILVER fOXX!!!
Expect the Unexpected when you least Expect it...
Top

Congrats Lou! Good to see that you re-lit the fire!
Top

I went thru a phase early on of passing bucks I had absolutely no business passing at that point in my life, heck they wouldn’t even get a pass from me now

Congrats man keep going out and enjoying it, that’s what it’s all about.
No Shortcuts. No Excuses. No Regrets.
Everybody's selling dreams. I'm too cheap to buy one.

Congrats on the deer!
On my deathbed, I will receive total consciousness. So I have that going for me, which is nice!
Top

Congrats Cuz!
If it makes you Smile...
Throw it on the pile!!!!
http://www.stealthoutdoors.com/
Top

You guys are great. Only on the BEAST can a long time member pop a button and not take crap. It is a testament to how great this site is.
I wish you all booners this year while I work my way back into the game.

Arrowbender wrote:Congrats Cuz!
If it makes you Smile...
Throw it on the pile!!!!

Not certain how I would have reacted if you posted a button, you like those big bucks. Thanks cuz. Wasn't even sure what it was when I took the pic and sent it to you, other than legal. There were a couple other things going on that I reserved for family.

Congrats Ol Top!
"One of the chief attractions of the life of the wilderness is its rugged and stalwart democracy; there every man stands for what he actually is and can show himself to be." — Theodore Roosevelt, 1893
Top
Post Reply
29 posts