Steering a deer with a trail cam? 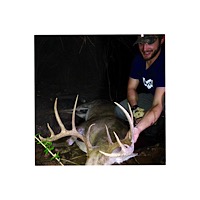 Re: Steering a deer with a trail cam?

VaBowKill5 wrote:That’s a great idea and makes perfect sense to me. I hunted a property for 4 years and watched the same buck for 3 seasons. He had split g2’s and was all over the place as a 2 year old and the same at 3 and I had boat loads of pics of him those 2 years. That October he was buddies up with a really nice mature 8 that I ended up shooting on opening day. The split G2 buck was with him and I swear from that point on I maybe only got 2 pictures of him over the next year and a half. When he was a 4 year old I was after him hard I ran 5 cams on the property and never got a single picture of him after July. However in mid October I walked the property with the wind in my face and I jumped him. I couldn’t believe he was still there. I then hunted close to bedding for the next 2 weeks before I killed him on October 29th and in that time frame I saw him 4 different times but never got a picture. He was there all along and he just managed to avoid my cameras at all cost. Is it possible that he related those cameras and my scent o when I shot the 8 pointer? I know it sounds crazy but it was like a light switch.

I have noticed that, outside of rut, pics seem to drop off if a camera is left in the same place too long. That is, if it’s noticeable at waist level and I’m checking it periodically.

Out of curiosity, how often were you checking your cams? What height were they mounted at and were they IR? Black Flash?

I was using browning IR cameras and I’d say I would check them maybe every 2 weeks but I was cautious of wind direction and would try to check either during a rain or right before a rain. I guess what was weird is that I was doing things exactly how I had done them before but he just avoided the cams. I was hanging them about waist high.

Thanks for the response. I have also noticed that some bucks don’t mind cameras. Maybe it doesn’t click that the out of place item means danger.

Other bucks avoid them like the plague! Just depends on his personality...

Definitely an eye opener though that just because there’s not a shooter on camera doesn’t mean there’s not one there.

Users browsing this forum: No registered users and 18 guests