I spent the last week of June fishing on my favorite musky lake in Northwest Wi ( Hayward area). I've fished this lake for 13 years now.

This year, I could not believe the amount of deer i was seeing walking, eating and laying in peoples yards on the surrounding lake properties (almost all does)
Talking to some of the locals at the tavern, they said they have been steadily increasing in numbers around the cabins the last few years, more so right now that the does have their small fawns.
Apparently they are figuring out that if you stay tucked in close to the buildings, there is a lot better chance you or your fawns wont get eaten by the wolves.
When I got back to work i was talking with a co-worker who has a place a little south of where I was. he said he was seeing the same thing in his area. He also said he has a BIL who is a CO up that way and he also confirmed this behavior to be taking place and has been discussed within the department regularly.
Even though feeding is allowed in this area, i question how much of a contribution it has to this phenomenom at this time of year when food is plentiful?

Got me thinking...
Even after the fawns are grown up somewhat in fall, I wonder how many of these deer really move off that far from the security of the cabin perimeters?
If that's the case, I would think the bucks would realize this and for sure have routes around these doe magnet areas. (I'm thinking it would be like a giant doe bedding area?)
Any of you northern Mn,Wi,or Mi. guys seeing this in their area and if so have you been able to capitalize on it?

Yup. There are a ton of does that hang out around our cabin up in Price County. We call them our "pets" because they're so tame. Took this over the 4th weekend... case in point.
You do not have the required permissions to view the files attached to this post.
Top

We have a slight deer problem in Boulder Junction.

I took this video when feeding was still legal. They are still around so I suspect the locals are still feeding them. Plenty of wolves in the area so the deer stay in town for safety. Every once in awhile a wolf snaps one up from the outskirts of town.

I’m headed back up there in the morning so maybe I will have more pics/video. Even if I did pick up a pattern with rutting bucks seeking those does I would never kill one. Just wouldn’t seem right. Interesting thing is you get a 1/4 mile out of town and deer sign is extremely low.
Top

Here on Long Island we hunt lots of small parcels compared to what most on this site hunt. All the bigger bucks tend to stay real close to houses. Well a few years ago they lifted the 500ft rule and cut it to 150’ of a dwelling. Well needless to say there was a big spike(no pun intended) in Pope and Young bucks harvested that year closer to the homes
Top 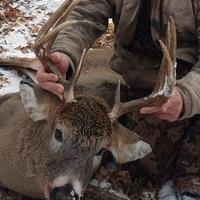 This happens a lot where i live, especially at my grandparents house (Duluth MN area). You can tell when the wolves are around, lots of deer tend to start bedding and just generally spending most of their time near the house and the out buildings. Not so much the large bucks though. Theres a lot of large tamarack and ash swamps i suspect they move off to when the predator pressure kicks. But I see lots of younger bucks near the does and fawns when this occurs. This is in the country, in the city its the opposite. Lots of large bucks live in the city and the surrounding suburbs. Last year i saw a large 12 pt walk right down a sidewalk in november in residential duluth where houses are stacked all around. Its not uncommon to be driving around and see a large mature animal. That being said, the wolves are now adapting to this in both the countryside and the city. I've seen plenty of wolves near the houses in the country, and theyre also hunting in the city. Plenty of situations where people have had dogs attacked while walking the hiking trails in duluth.
Top
Post Reply
5 posts • Page 1 of 1