What do you think about this bed? 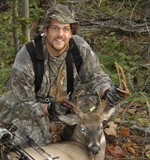 What do you think about this bed?

I am fairly new (<1yr) to the hunting beast style and wanted to run this find past you guys to get your thoughts. I was hunting some private land I have access to in central Virginia. This area is a former cattle/horse farm that no longer has livestock. It is adjacent to some ag fields which I believe this year is in beans. I decided to hunt a major creek crossing in the morning last Friday. We had a NW wind. I got in clean and did not see anything so I opted to do some in season scouting. I scouted to the south of me on some rolling hills on the other side of the creek. I immediately found a worn trail with fresh tracks and a scrape with prints in it along the military crest of the hill. There are a lot of oaks on this hill so I went looking for acorns and did not find any but found a lot of tracks and torn up areas. It looked like they had possibly eaten them all up. After roaming the hillside I went back to the scrape and picked up the trail again. It followed the military crest and then all of a sudden, BAM, there it was......the buck bed that makes your jaw drop. It was textbook. Just like Dan explains it. The trail along the crest met a small drainage swale that eventually ended at a bench near the top of the hill. This bench was matted down in a large area, like he was shifting his bedding. The front of the bed looked down to the creek bottom and watches an access point that I use and a few others that can hunt the property. Behind the bed was a small knoll and thick saplings. Many of the saplings had old rubs but nothing that was fresh. Using my GPS, I tracked my trail into the bed and also one on the backside of the bed. I am going to try and attach links. Hopefully you can see the topo map and the pictures. In my opinion, this bed faces North-ish and therefore would be used on a South wind. My plan is to loop around downwind and get as close as I can without the buck seeing me or hearing me. I picked a tree that was about 350 feet from the bed. Hopefully on the next south wind he will be in there.

Here is where I need some help. We had a North wind that day but there was fresh tracks leading into the bed. There was a fresh scrape but no fresh rubs in the bed. We had also had hurricane Michael come through the night before which would have washed everything away so the tracks had have been made that day. Something does not make sense. Could that be an anytime bed? Why are there no fresh rubs in it?

In the topo map- the red square is where I can not hunt, and the light blue outline shows where I have permission. The dark blue line is the buck trail with the scrape, the Killing Tree I picked out and the scrape. You can ignore the yellow dots, they are just areas I suspect will be good stand locations based off of topography and land features.

Re: What do you think about this bed?

Sometimes they’ll bed on the windward side. Sometimes the wind doesn’t do what you think it would do. I’ve got quite a few similar spots where a NE wind there would mix with rising thermals and kick SE off that ditch across his bed, especially post leaf drop. It’s getting said a lot lately, but you’re gonna have to get in there and drop some milkweed.

If you’ve got fresh scrapes and tracks, fresh rubs aren’t anything to worry about. I’m guessing you found a bed, and if you checked out your yellow dots you’ll find more, and some fresh rubs along the way. In Ohio and Ky we had an afternoon wind switch last Sa from that front. That bed might have been briefly used if that was the case in your area.
Top
Post Reply
2 posts • Page 1 of 1