I’m looking for everyone’s opinion on deer, specifically mature bucks bedding in standing corn. I have bumped several mature bucks out of end rows. The buck I shot this year was leaving a locust thicket and followed 3 does directly across the field edge into the standing corn (oct 28 last light). Most of the time it’s in flat farm country but I have also noticed it in hill country that has lots of ag. I can’t seem to get a rhyme or reason to what time of year, location of the bed or why they’re using it when they do. Any input would be greatly appreciated.

There are some good threads buried on the subject. Maybe someone will post a link
Top

Yeah, if somebody knew where to dig that up, I’d love to see what guys opinions are on it. Tia
Top 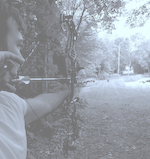 One of my favorite spots is a chunk of public with a 40ish acre field of standing corn next to it. In early season I had a couple encounters on the field edge where there are trees running along the field. I haven't seen anything there since gun opener though.

I was going to post a pic and start my own thread to ask how people would hunt this but never did. I will post that pic here and maybe it will add to the discussion.

Blue stars were buck encounters earlier this year. I've only seen bucks in this area except one doe sighting last year.

Here is a zoomed out version:

The corn is still standing so I am guessing they won't harvest it anymore this year. How do you hunt this scenario? I feel like it only makes sense that the deer would hunker down in the corn.
Top
Post Reply
4 posts • Page 1 of 1