Last night I had a "hunt" that to a lot of people might have been discouraging but I left feeling very satisfied. I am a student minister at my local church so I often attend sporting events of my students. Last night I attended a volleyball game and rushed home, threw on all my gear and ran out the door with some food in my hand. I knew I was cutting it close but what the heck.... Why not! I was headed to a spot that I felt was an overlooked spot. It has two fields of milo and a large CRP field that surround a small woodlot right off a main road. Typically its highly used for bird hunters not deer hunter. I am new to beast tactics but I had shed hunted this spot the last couple years and have found 4 sheds 2 of which were a matchings set from a really good buck. A month or so ago I went in looking for beds on a transition line where the woodlot turned into thick vegetation before it hit the field edge. Sure enough I found a single bed on the transition line that had hair in it and looked to be well used. I knew it had to be a buck bed. Yesterday mid morning I went in to set up a camera over a community scrape and noticed that their was fresh sign everywhere. We have had rain the past couple days and yesterday was no different. Overcast with on and off rain. We also had heavy rains in the forecast overnight. As I was driving out I felt like they could be moving early but It was a chance i was willing to take. Wind, I thought, was going to be just off. I pulled into the parking at 6. Last light was at 740. I knew I was cutting it close. I hightailed it to the corner where I thought I could cut them off. I put my stuff down put my first stick on. Grabbed my second stick and as I was putting it on I caught movement from the direction of that bed. Sure enough it was a young buck probably 2.5 tall but narrow 8. The wood lot had a slight draw in it and I think with my slight off wind and the overcast day thermals were carrying my scent slowly down the draw. We stared off for a few minutes. My calf was cramping up from trying to hold all my weight on one step. Eventually he worked off on high alert. I ended up pulling out... not sure if that was the right move or not.

I say all of this to say thanks to all of you guys for the great info and I am excited to continue learning. I know he wasnt a mature buck or even a buck I was looking for but the tactics worked. I know I probably was way to late getting in there. I know I misjudged the wind but I left their feeling more satisfied than disappointed. Some of these beast tactics are a little different to apply in Kansas because of terrain differences. I cant wait to get a full off season of scouting under my belt. I already had the marsh bedding DVD and now I have the Hill country on the way. I have so much more to learn. This was probably my 5 or 6th sit on public land this year and my second young buck sighting. I have been in deer on almost all the sits just not the deer I want.

Thanks again guys I appreciate it. 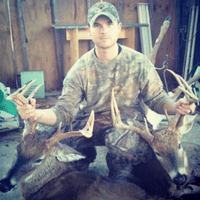 Now you know what route he took. Wait til conditions are the same and move in to kill him. Good luck on the rest of your season.
Top

Welcome to the addiction 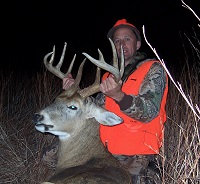 Nice Job !! Attitude is EVERYTHING !!