I've unknowingly followed many of the principles of beast style hunting for many years, but it wasn't until I came here that I refined my approach enough to make it all come together. In the past, I had passed many opportunities at small bucks hunting near bedding in the afternoons, and taken countless does. I think (hope?) I would have eventually put together the missing pieces, but I will forever be grateful to Dan and all the great members here for hastening my learning curve! It's no coincidence my first beast style buck is also my biggest ever!

The background:
I had lots of pics of this buck as a 3 year old last season. He was the smallest racked 3 year old I was following, but the most visible. During the offseason, I spent hours analyzing my pics and piecing together this buck's tendencies. My family operates a small farm in Tennessee, and luckily this guy's range seemed to have been centered on our property. Last spring I scouted and shed hunted like I always have, but other than moving s few stands around I didn't do anything differently. Found and joined the site in the summer and got busy seeking out beds. Almost all of the bedding is off our land at higher elevation but luckily the landowners are fine with us hiking their properties. I found several buck beds, but could only make guesses at which one(s) the hit list bucks would use. I entered the season with 4 bucks I was after, all 4 year olds to my knowledge. The rut here is the week of Christmas, and I spent almost all of my time in October and November on public land biding my time waiting to strike.

The hunt:
Sunday December 18th was warm and extremely windy, with temps 20 degrees above average. Monday December 19th was a post-front sunny day with a 30 degree high and north wind. I've always seen an influence from an overhead or underfoot moon position just before sunset, and on this day we had an underfoot moon at 4:58 PM just before the end of legal light at 5:06 PM. Perfect.

I dipped out of work at 1 and hit the woods. Everything on our side of the mountain basically faces north, so I can't hunt the area in a leeward position in the classic sense, but I've always observed does and young bucks bedding on the western side of a certain rocky (as in boulders) point when we have cold weather and north winds. Seems they tuck in between those big sofa sized rocks and lay in the sunshine out of the wind. I used the stiff breeze to skirt around where I suspected them to be, and got in a transition area as close as I could get to buck bedding without crossing the property line. I was surprised at the amount of fresh sign as I approached the area, and although I planned to go another 100 yards I've heard too many folks here say not to ignore fresh sign! I passed two fairly common scrapes, and then saw a big pile of buck scat, a shredded cedar tree, and a large scrape ahead. I picked a tree and got settled in with a just off wind to where I hoped bucks would be coming from.

After 4:00 the wind died and it got still and quiet, but the squirrels were feeding everywhere. That's when one of the more bizarre things I've seen from a treestand occurred- a hawk came diving after a squirrel, but flee head on into an old woven wire fence that used to mark the property line. I mean he just nailed it! After initially lamenting the idea that he just ruined my hunt with the loud crash, I quickly realized that amazing encounters like that were what makes days in the woods so special. I was watching the hawk at 30 yards through binos,and he's out cold. I wasn't sure if he was dead or just stunned, but after 5 minutes or so he came to, jumped up on the fence that was almost his demise, and looked around like what the heck just happened?! Amazingly, he flew off unharmed.

I didn't see or hear any deer until about ten minutes til 5:00. That's when I heard slow, methodical footsteps up in the rocks above me, moving from right to left. I strained my eyes searching through the thick tangle of cedars and boulders until I finally caught a glimpse of tines. Shooter! Unfortunately he was out of my sight about as fast as he was in it. Thinking quick, I mouth grunted at him but he didn't seen to hear it. I grabbed my homemade walnut grunt tube I turned out of walnut sawed by my grandfather years ago,and for the first time ever I called in a buck. He stopped and I could imagine him staring my way, but I couldn't see him. Finally, he took 4 or 5 steps my way. He was bristled up and facing me at 50 yards. I didn't wait around to see if he would come any closer, as I centered my crosshairs just under his neck and ended the hunt. He lunged forward and fell 20 yards away at 4:54 PM.

Despite having dozens of trail camera pics of this guy, I was amazed at his mass and body size when I walked up on him. I've killed deer with longer tines and better width, but none that was as heavy as this brute. I'm extremely proud of the opportunity to hunt this buck, and thankful for the knowledge I've gained here these last few months!

Not all those who wander are lost...
Top 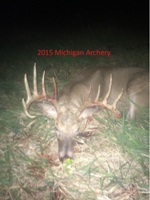 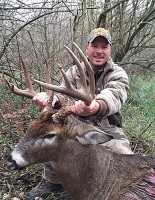 Congrats on the nice buck!!
Luck is when preparation meets opportunity!!
Top 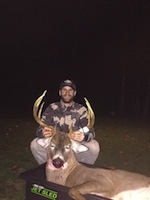 Beauty! So crazy to have rut during December!
Top

awesome buck and great story
IF YOU EVER HAVE A DAY IN THE WOODS WHERE YOU DONT LEARN SOMETHING, THEN YOU DIDNT PAY CLOSE ENOUGH ATTENTION
Top

Congrats jwilkstn!!
“The master has failed more times than the beginner has even tried.”
Top 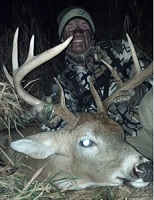 Thanks to everyone who commented
Not all those who wander are lost...
Top