Let One Slip Through My Fingers

Let One Slip Through My Fingers

While watching the weather last week and seeing the forecasted drop in temps and high winds, and thinking about where I should go yesterday, a discussion on here about that very thing caught my attention. Someone (I don't remember who) said "three words.Low, thick, and leeward" and right away I thought of a spot I had scouted/ hunted Nov.7. Not sure I can describe it well enough but it's the end of a lake finger full of cattails with a wide, thick creekbottom running into it. On top,along the edge of the creekbottom, is an overgrown field with several strips of wheat/turnips planted through it.Its not terribly steep terrain, but as the field drops toward the lake, of course so does the ridge. The creek runs into the lake on an angle, so there is kind of a corner where it all comes together. Field over the right shoulder, creek ahead and to the right with the lake finger to the left. The ridge between the creek and field starts there as well. Although there is no underbush next to the lake due to flooding ther is a thick wall of brush along the edge of the field. Also, part of the bottom close to the lake floods but there is a strip of higher ground right along the creek so we go from totaly no brush to very thick.
On my hunt Nov. 7, I had a doe an fawn follow the edge of the thick stuff then cross the creek just out of range so i decided to sit the same spot on the ground. I was just over the ridge against a big oak with the wind blowing right back into the field behind me.
This is a fwa. Buck only during gun season and no hpr so I had my muzzleloader. Saw a doe at 9, then nothing till 5 when a small buck followed the creek on the other side. The wind died down some, and about sunset during a break in the wind I hear something walking. I look left and see antlers coming around the thick brush 40 yd away at the corner of the field. I swivel left while cocking my gun. I figure he'll keep walking straight to the creek crossing or follow the base of the ridge. But no he cuts the corner and walks the side of the ridge straight at me. At 20 yd he sees me, stops, stares bobs his head once. I contemplated shooting him in the chest, but I've never taken a frontal shot on a deer. Also I've never killed a deer with a patched round ball and loose powder and the last thing I want is a badly hit deer so I waited thinking he might turn and offer a broadside shot. Keep in mind, this staredown was brief. I had little time to think about all this. He took 2 quick steps toward the field an was into the brush so I stood hoping to get a shot. He was maybe 35 yd but with me being just over the ridge an the brush there was no way. He got my wind and was gone in a flash.Never blew but he had to have smelled me.I don't usually count points at times like that, but I'm thinking at least 120 inch buck.probably 3.5.
So today I've been kicking myself. Man I sat in the cold all day only to blow it. Thats not the first deer I should have killed but didn't because I wanted a better angle.I just read a discussion on here about always taking the first shot you can, you might not get a better one.I guess I lack confidence unless everything is perfect. I would rather let a deer go than make a bad shot, but 20 yd? With a muzzleloader? Something I need to work on.

A few positive things from this hunt.
1. I didn't have to drag a deer 3/4 mi so I got home to my family earlier. Just kidding.I wanted him bad
2.What I knew before and am learning more of since joining the beast about deer using edges and wind I saw firsthand. he was walking into the wind along the brush at the end of the field and when he turned the corner he was heading up the downwind side of the creek bottom.
3.I think this spot could be good.If I can figure out where to sit besides where the deer walk. The ridge where I was sitting is only about 8 or 10 ft up but goes up from there. I hadn't thought about them cutting the corner instead of staying down at the base of it.
4.I trusted my gut. At 2 I was tempted to move, to walk around, to scout more. But I decided I had picked this spot for a reason and all I would do is kick up deer.So I stayed put.
My goal, and really the reason I joined th beast is to become more efficient in my hunting. Learn to idenify good spots and when to hunt them, because with a family now I don't have much time. I don't post much but I'm on here a lot. Always learn something. Well, enough of my rambling.

I'd like to hear from others who have had the same indecision.Do I shoot or should I wait? What has helped you make that split second decision in the moment of truth?
Also the frontal shot- In thinking about it and studying deer anatomy online I think it's an ethical shot with a gun. Since I'm probably more of a bowhunter at heart an since it's not a shot I feel comfortable taking with a bow, I guess is the reason I was waiting for a different angle. Thoughts on this are welcome as well.

Nothing at all passing a shot you weren't comfortable with.


You have to know your weapon and it's capabilities.


In my rifles I shoot bonded bullets. Guys argue till they are blue in the face that they aren't needed for deer. And I would agree to an extent. I don't hesitate to take whatever shot might present itself. I treat it like bow hunting and figure out what I need to do to get the bullet through the chest cavity.

I shot a buck once almost completely walking away. I was initially going to pass him...as he walked away I realized he was gut shot and I decided the ethical thing was to put him down. In just infront of the right leg bone and stopped just after it blew up the far shoulder.

He wouldn't stop for anything so I couldn't put one in his neck or anything.


I've passed on bucks I just wasn't comfortable with shooting...actually most of the biggest bucks I've seen while hunting have walked because of one thing or another.

That's part of hunting. I'd rather pass an animal opposed to take a questionable shot and miss or wound it.

There's a fine line there somewhere between learning to shoot critters And when to pass. I've never killed anything I didn't shoot at. I'm not one to fill the air with lead and hope something connects. But if I'm comfortable with a shot I'm shooting.

You did alright. Sounds like a good hunting spot too.

Confidence in your equipment is important. Knowing what it will and won't do is likewise important.

I'm more a gun hunter and my primary concern is about putting one through the chest, aim for the exit hole and let it rip.

A patched ball will tear a hole through a deer. We used to use those back in the day.
Top 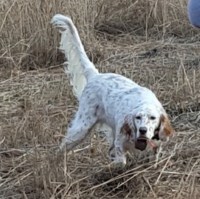 Passing on an iffy shot makes you a better and more ethical hunter than taking the shot. Something to be proud of rather than lamenting.
Life is short, eat dessert first!
Top

You scouted the area figured out how and when to hunt it, and decided to pass on a nice buck. I would describe that as a pretty successful hunt.
Top

sure no reason to kick yourself,sounds like you did all you could.its so easy to replay things like this over and over in our heads.you had just seconds to make a call and you done what you thought was right.sounds to me like a guy that has the utmost respect for the animal you hunt. I give you a slap on the back, good things will be coming your way, hang in there
Top

One of my biggest mistakes is waiting to identify deer first and act second...they're usually long gone by the time I get the gun up. So, this year I've concentrated gun up, then decide. I'm not sure how I got started on that habit, but, if I want a shot, I need to change.It really sucks when you feel like you waste a whole day of sitting on doing something dumb. Lets learn and improve!!
Yesterdays common sense is no longer common
Top

Thanks guys.I think maybe I put to much pressure on myself. This is my second year hunting IN so I'm still learning/trying to find new spots and with work and family my time is limited. I know I won't have nearly enough time to scout this winter. My goal is to learn to be efficient with my time so I plan to get the dvds for Christmas.