We got our first call Sat. night, the hunter shot a buck at a hard quartering away angle and ended up hitting the deer in the rump with the bolt angling into the guts. After talking with the hunter we decided to meet with him in the morning and start the track. The hunter said when he shot the buck it never ran and wouldn't put any weight on that leg, he could see that the bolt was buried to the fletching. Its important to note here that the hunter did everything right, he saw it was a bad shot, carefully marked from the hit site to the point of loss without stepping in the blood, and got out of the area.

We got out at about 8:00 AM and met the hunter to discuss more about the shot and he took us out to the hit site. We started the track at the hit site and Maize started working the trail. We had to re start her a couple times and she started tracking up hill the direction the buck had come from. We wernt getting any conformation in the form of blood but she was working toward a known bedding area. At this point we didn't know where exactly where the bolt hit. The bolt could have been in the ham or any number of places. The blood we did have at the hit site looked more like muscle blood with to visible gut matter. So after going about 400 to 500 yards we thought it might just be a muscle wound but decided to go back to the hit site and try again. Its hard to say what Mazie was tracking, it could have been the bucks back trail or another deer could have walked in the blood and headed back to the bedding area. If starting at the hit site didn't work then we were going to go into the swamp and work parallel to the transition line to see if we couldn't get lucky and cut his trail.

So we started the trail again and made some head way then she found some blood after the point of loss heading into the swamp and kept on the trail finding more drops then a wound bed and finally the dead buck! We figure the trail to be about 15 hours old.

Here's some pic's of Maize with my wife and the hunter. 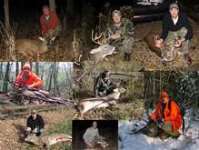 Great work! Did it end up being guts?
Top

Ya the bolt ended up going in the rump and heading right into the guts.
"Freedom Isn't Free"
Top

My only question is why is a young man like that hunting with a crossbow?? Hopefully shoulder issues? Congrats on finding the buck! I'm thinking he never would have found that deer. Terrible shot.. Been there though.. 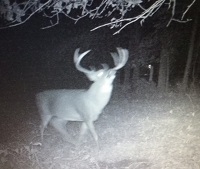 Expect the Unexpected when you least Expect it...
Top
Post Reply
8 posts • Page 1 of 1