One of the major reasons I can't get enough of bow hunting, is no matter how long I have done it, I learn something new every time. This time was no exception.

Sidenote: I brought the deer tracking dog on the trail and we found the deer 40 yds later. We laughed that the dog wasn't necessary but he applauded allowing the dog to get the experience and also the patience to not track when there is any doubt. He said the majority of the deer he has tracked and found, could have been recovered in their first bed, but hunters tend to get anxious and push poorly hit deer, making recovery difficult and sometimes impossible. Joe Walters is with the united Blood Trackers of the midwest. He has many years under his belt and he and his dog Maddie are well versed on trailing whitetail. If you have never seen one of these dogs work, you need to. It is a cool experience. I would strongly encourage any of you who may not be sure on a shot to back off and get a hold of one of these guys. Awesome to watch a dog work the trail flawlessly. 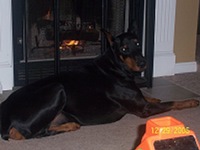 Very nice buck you got yourself.
Top

You did everything right. Excellent recovery and one heck of a buck. Congrats!!

If you want to kill a deer you have to be in the woods.
Top