Went out for a short walk at the state park this evening....and found another, some velvet on the bases.

It is ten....I took some time to count and thats the correct #.
"Forged in fire lit long ago. Stand next to me and you will never stand alone".
Top

What the heck is going on there in Kansas?

And some unrecovered bucks, I think.

The two today get an EHD vote from me.
"Forged in fire lit long ago. Stand next to me and you will never stand alone".
Top

And some unrecovered bucks, I think.

The two today get an EHD vote from me.

Hate to hear that for you Zap. Always welcome in Missouri if the after effects get too depressing.
Top

EHD does not affect humans, nor impact the safety of consumed deer.
EHD is caused by the bite of an infected midge and once there has been a hard freeze, the insects die off for the winter, eliminating new cases of EHD.
Most significant disease of white-tailed deer in the United States
Virus identified and described in 1955 in NJ.
Enzootic to Southeastern United States.
Outbreaks often associated with drought.
Can result in high deer mortality in some areas.
EHD Symptoms:

Symptoms vary depending on virulence of the virus and resistance of the deer.
Animals may appear feverish
Have pronounced swelling of head, neck, tongue, and eyelids
May have respiratory distress
Internal hemorrhaging
Highly virulent strains may cause death in 1-3 days.
Carcasses often recovered near water.
EHD Transmission:

The EHD virus does not appear to be transmissible to humans.
EHD does not pose a serious threat to livestock (according to the Ohio Department of Agriculture.)
The virus deteriorates in <24 hours after death and cannot be spread from dead deer carcasses
There appears to be no risk associated with direct exposure to the virus or in consuming a deer that has been infected with the virus.
However, never kill or eat a sick deer.
Use rubber gloves to field dress deer.
EHD Management:

MarkTwain wrote:Hate to hear that for you Zap. Always welcome in Missouri if the after effects get too depressing.

Thanks, appreciate that.
Hopefully I will be hunting Mo this coming season anyway.
I looked at the stats and only 145 hunters killed three bucks this past season........

EHD killed over 90% of the heard in some countys here in 2007. My county was not hit that hard, we only lost around 40% of the heard.
Top 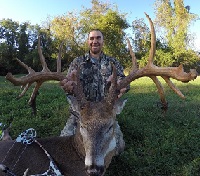 That is rough. EHD can be a real doozie. The Milk River drainage system in Montana lost like 90-95% of its deer to EHD this year. My county got hit real hard about 5 years ago, and I'm hearing that parts got it really bad this past summer as well. I found one of the biggest bucks I have ever seen dead from EHD. I find a couple every year. It is tough to know that many bucks get killed from EHD. That is just that many bucks that you could be hunting or that many more antlers you could be finding if you were shedhunting. I hope the herd and you the best.
Top
Post Reply
13 posts • Page 1 of 1