This archery season I hunted exclusively on Public Land on Southcentral Wisconsin. One would think that someone would get discouraged when out of 9 sits I saw zero deer from the stand (i did see others while walking around scouting). But in the words of Dan Infalt, “I am not hunting deer, I am hunting big bucks!” I saw my first two deer from the stand on October 31st. Both were shooter bucks within shooting range and I ended up killing the smaller of the two.


This kill began with scouting and hunting this area in the fall of 2015. I checked out the area in 2015 because it looked like a good spot on a map. I dropped off a trail camera while I was there. I got quite a few pictures of bucks I’d like to shoot, some in daylight too. 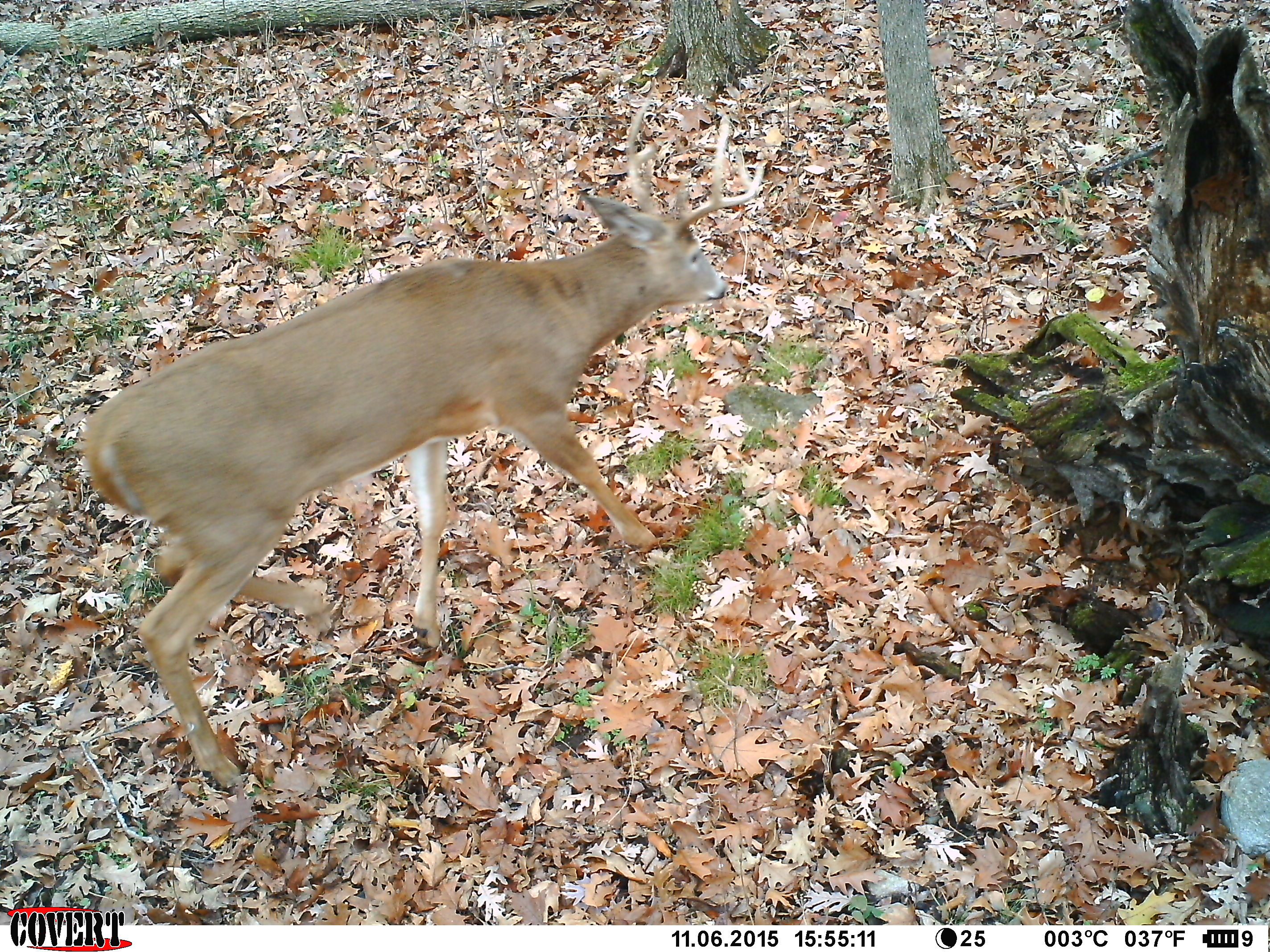 I decided that I would have to go out there and hunt on the anniversary of the daylight picture of the biggest buck, October 31st. This decision was kind of based on the Wired to hunt podcast with Don Higgins. A good listen if you have not heard it.


I scouted the place out in the spring. Spent the better part of a day out there. Luckily I even made a pretty good video of my scouting that day. The video explains the scouting better than I can in words. Pretty much all of my assumptions on the beds and scrapes held true on the day of the kill. (Skip to 7:15 to see the sign that i decided to hunt over)


The basic plan of the hunt was to get into the downwind side of the bedding area and sit over the scrape as a good ambush point. I ended up hunting out there on October 30th in the evening because I was a little intimidated by the access route. It was pretty deep water for much of the way. 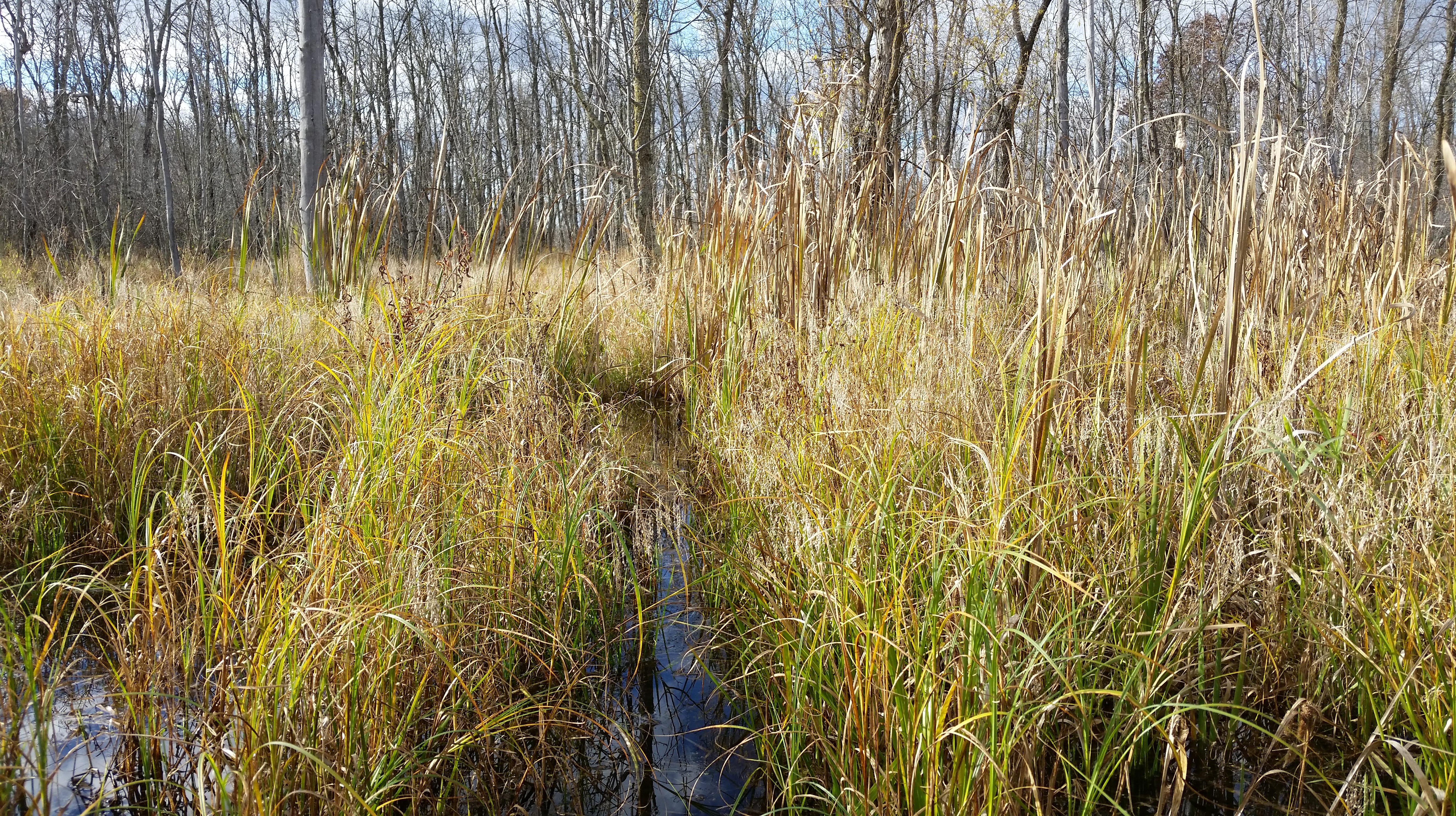 Well I got in that afternoon and found my tree easily. As I climbed the tree, I suddenly heard a lone deer jump up right in the bedding and run off and bail into the marsh. I was very bummed to have that happen because the deer was right where it was supposed to be, meaning likely a buck bedding in the buck bedding I was hunting. I got settled into the tree and sure enough, the scrape I showed in the scouting video was right in the same spot this year and it had been worked over fairly recently.


Picture of the scrape from my stand: Panoramic view of the spot:

Because that spot was being actively used, I decided that I would come back the next morning. I got out there nice and early. Later in the morning around 8am I heard sloshing right behind me. I turned around to see a big buck, looked like a steer with antlers at about 25 yards. Since I did not expect deer to walk back there in the water, I did not have a clear shot. I did get drawn back on him and resisted the urge to send an arrow through a very small opening that was unlikely to get an arrow cleanly through it. He ended up getting directly downwind of me, stopped, and trotted out back into the swamp where he came from. It was a beast of a 9 point, mainframe 8 with a sticker point. I was really bummed about that but decided that I needed to just stick this place out for the rest of the day since I knew there were other bucks around and this spot was obviously hot.


A little after noon, I caught movement in the bedding area. I glassed into there and I saw a rack. I watched for a while and I am pretty sure I saw him bed down because he looked like he was down low and all I could see was the back of his head and and rack. After a while I lost sight of him and then saw him again. He was just kind of mingling around. I decided that it was time to give him a grunt. Gave a couple toots on the desperation horn. And sure enough he started wandering my way. I think he heard my calling but not sure. He came to 35 yards and thrashed a tree. I was just watching him rub this tree for a while. Once again i had to restrain myself from taking a shot with one branch in the way. I did get drawn back on him but let down. He started to turn and it looked like he was going to start walking away from me. I gave two more soft toots on the grunt and he lifted his head up. He jumped over the log, grunted a couple times and came to 20 yards and worked a scrape that I didnt know was there. I still had no shot because the licking branch was right over him. He took a few more steps and got to about 15 yards, turned broadside and I let him have it.


He beelined about 80 yards, just out of sight, stopped and then bullrushed right back towards me. He died within sight of my tree. I was so relieved to make a clean shot and have it over quickly.


The tree he rubbed right before it was over: 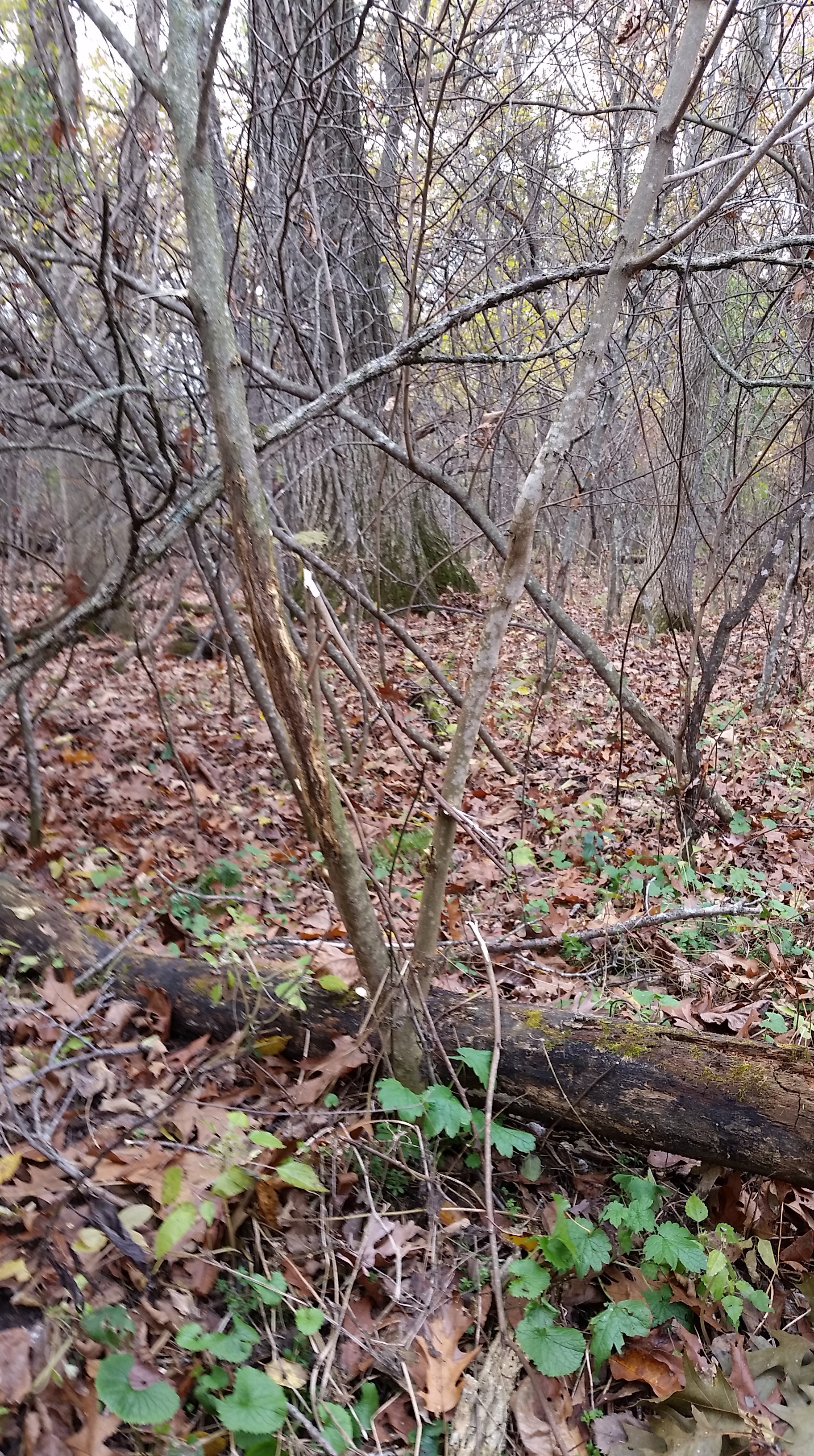 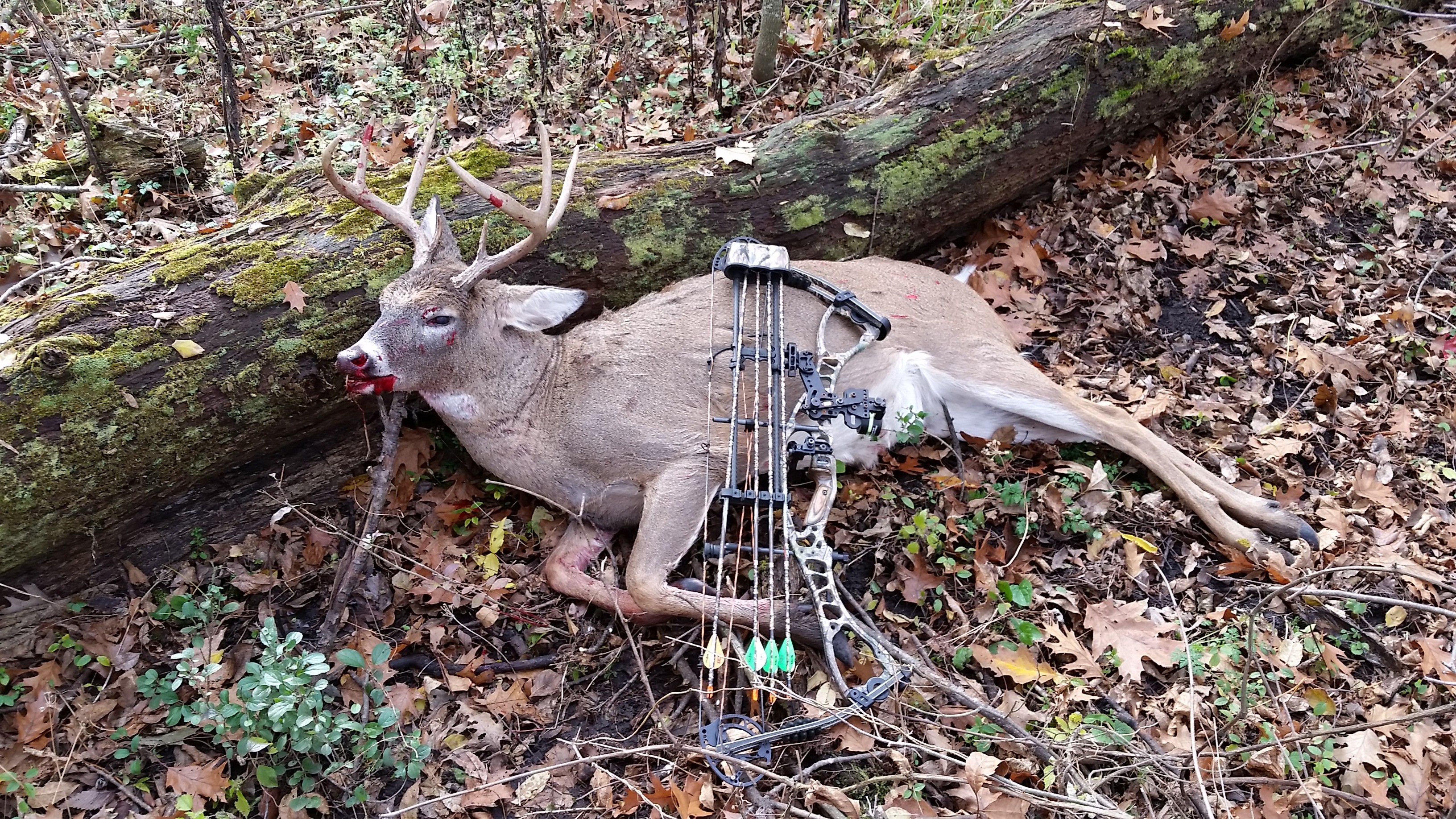 The drag was pretty tough, although it was only 0.30 miles and a floating deer is pretty easy to drag. 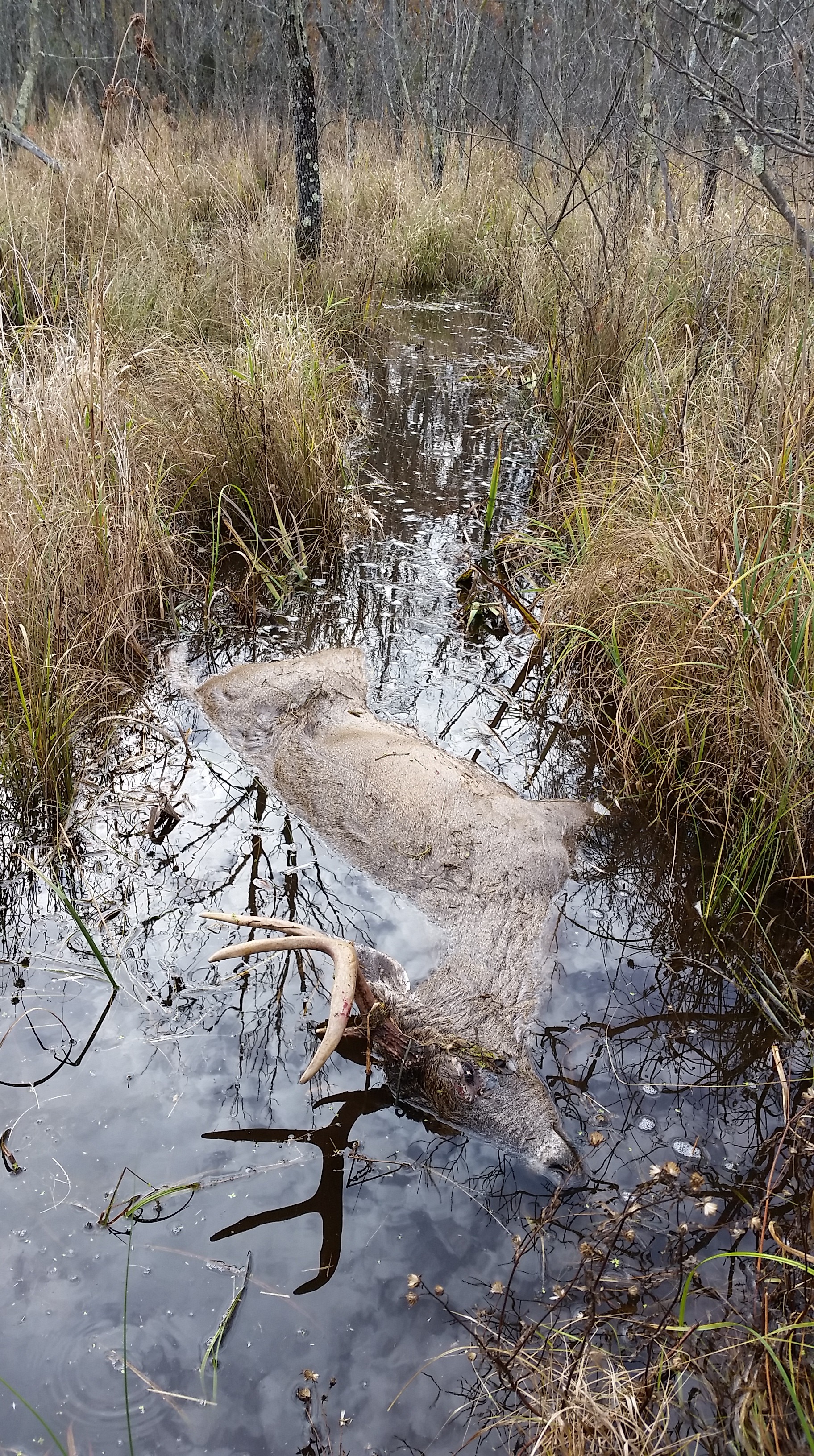 I discovered I did have a trail cam picture of this buck as well: Congrats man!!! Great story and thanks for sharing your scouting trip as well!!!

Congrats! Awesome to see all that hardwork pay off! Great journey.
Top Congrats on getting done on public man.
Tuf- The below average hunting beast
Top

Way to stick with it! Congrats!