mheichelbech wrote:I agree....however, one show I do usually enjoy is Major League Bowhunters....they don't plug products quite as bad as many other shows....and they show a lot of the failures too. I remember one show with Danker where (unless they were flat out lying which I don't think so) they hunted in Iowa or Kansas for 17 straight days, he shot and missed the buck as it scrunched down and the arrow went over his back. They talked about Matt Duff not tagging out the entire season and showed how he messed up not cutting some shooting lanes and how he didn't tag out in Canada after about a month of hunting up there. They also are pretty open about hunting on outfitted ranches and don't seem to hide or gloss over things that I can tell. Yes, they do plug products and all but it is one of the most honest shows out there from a hunting standpoint....and the music is actually decent! Many of the other shows are pretty much just hunting porn and the music sounds like it....lol.

Its called Major League Bowhunters because its being funded by Major League Baseball player and future hall of famer Chipper Jones.Not trying to be a hater but just sayin.......honest show maybe realistic not so much.......

ihookem wrote:I don't think I ever whatched one, except for at a friends house. I am going to watch a dvd I ordered. Something like " Marsh Bucks" or something like that. Gets high reviews on some hunting message board where these guys go crazy over anything that has to do with a deer. They even spend thousands of dollars chasing them. And after season ends , if they don't get the deer they spent thousands on, even after passing up real nice deer cause it wasn't the one they decided they wanted to kill. Then if they don't kill it they go look for the bucks antlers. If they don't find the antlers they look to see if they can find it dead after all. All that just for kicks. Them guys are nuts. 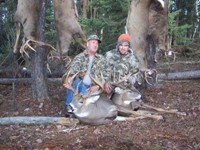 While I dont like many for the above noted reasons, I do watch them from time to time. I'll DVR Heartland Bowhunter. They do a good job of capturing the entire hunt and the film quality is exceptional.

I like heartland bowhunter, the western hunter, and meat eater. I watch other shows too just to see big deer, I cant stand Lee and Tiffany, they make my skin crawl and Im sick of seeing them shoved in my face everywhere. Other guys are right about not learning anything from bucks eat at a bait pile just to get shot. I also refuse to watch any shows filmed in Texas, that place is a joke.
Top

Don't like any show in Texas as well. Too many ranches/outfitters which all they do is have shooting lanes and bait.

The two shows I like is Major League Bowhunters & Gun It with Benny Spies.

MLB does hunt their own land and some outfitters. They actually show all the good and bad things that happen. One of their first shows this year Danker was after a deer named Loopy, that they believed was poached from his land. It does help that Matt Duff and Chipper Jones were former MLB players. But, Matt Duff hasn't got a deer in the last two seasons and showed him hunting public land down in his home state of Mississippi.

Benny Spies hunts all different species and goes around in his 1973 Winnebago Brave. He hunts public and private land and it's all from people he knows or meets throughout the years.

All shows have sponsors, otherwise they would never be on TV. It all depends on how hard they push the products.
"If you consider an unsuccessful hunt to be a waste of time, then the true meaning of the chase eludes you all together" ~ Fred Bear

"Don't take anything for granted, because tomorrow is not promised to any of us." ~ Kirby Puckett
Top

IF YOU EVER HAVE A DAY IN THE WOODS WHERE YOU DONT LEARN SOMETHING, THEN YOU DIDNT PAY CLOSE ENOUGH ATTENTION
Top

I used to watch a lot of the popular shows , but not much anymore. I watch a lot of Mickey Mouse and the toy story trilogy. But Eastmans hunting journal is a good show. They hunt a lot of public land out west for mule deer.