Andrea sets his standards pretty high... There is usually only one buck any given property he hunts. Knowing the exact bedding spot is critical in killing the buck.
Although bucks get pretty edgy about harassment they do have to put up with hikers, farm dogs, coyotes, and wolves in some areas and often get bumped out of there beds. They will put up with a certain extent of this type of harassment. Sometimes they will put up with one bump, sometimes several, sometimes 1st bump and there gone... I often tease Andrea about his "bump em and dump em" tactic and tell him in the public marsh we call it "Bump em and never ever ever see them again" but to be honest, it has sometimes worked here too.
There are ways to make it work better too... We have two definitions of a "bump". A hard bump is when you aggressively push a buck from his bed with the intent of him relocating to a new spot. A soft bump is where you move him, but try not to scare the crap out of him.
To soft bump a deer, a person does not want to walk directly towards the animal. Angles make it appear to the animal that your just passing by. Also, when the deer stands or trots off don't stop walking make it appear as though you could care less what the deer does. On andreas property they are used to atv's occasionally crossing the property so he will sometimes cruise past a buck bedding area with the ATC and see what gets up...
Timing is important too... Really, its probably thee most important thing in bump and dump hunting... Bucks should be bumped about an hour before dark, or just before they normally get to there feet... The reason for this is because a deer that is bumped just before he would normally get up is more likely to just go about his normal night time routine after settling back down. Then at the end of the night he just goes back to the same old bed out of habit... When bumped early in the day they will head to another bedding area, then there is a good chance they will bed in the new spot rather than the spot you bumped them from.
It should also be said that Andrea usually knows these bedding areas pretty well, it is not a good idea to get scent near the bed or near the entrance rought you suspect the buck will use. Its important for the buck to believe the bump just wandered through. If he hints human scent on his way to the bed, he will likely turn tail...
https://www.youtube.com/channel/UCAb0Ia ... TAslJ6D32w

For those of you that would consider scouting a swamp or marsh from late spring on... preparation should be different, especially if you are going in a great distance. Problems in this type of environment at that time of the year include biting/stinging insects, quick dehydration, an unbelievable speed of overheating your core body temperature, and greatly reduced visibility for navigation. Make sure someone knows where you are going and prepare carefully.

This is the best summary of Andrea's "bump and dump" method that I've seen to date. Great post! Thanks for taking the time Dan!
Scout, scout, scout, hunt
Top 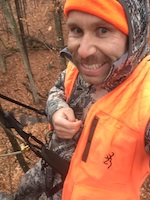