I choked under pressure last Saturday and ate tag soup for the 4th period, I have one more tag for an unpressured urban farm for the 18th I'm hoping for redemption. Without pics or video I am sure there is less interest but I have to get it off my chest this is killing me. I am happy I did not have the camera rolling or I'd probably be kicking myself much harder. This is the second year in a row I have eaten tag soup because I was waiting on someone else to give me the command to shoot rather than just doing it on my own. Basically I am new to turkey hunting and rather than pulling the trigger I second guessed myself...two years in a row now

I was only able to hunt with my buddies Dan and Jason in Price County saturday and sunday due to some obligations. Got up there late afternoon friday and we drove miles and miles before finding a bird on roost at last light. The next morning we get set up just as day is breaking and the true beauty of this piece of land is incredible-we were hunting forest crop land and Plum Creek papermill land (also forest crop) which consisted of big ridges, open hardwoods and northern WI swampy terrain. Sunrise on the steep hills and ridges in big open hardwoods with occaisional pines, spruce and fir trees was an amazing site. The place is awesome and the weather was ideal. We get set up and Jason hits the call and instantly we hear a gobble a few ridges off. That bird worked in perfectly from about 3 ridges over gobbling the whole way right into Jason's lap who was about 15ft or so behind me. It came in off to my left where I had no shot and saw something it didn't like, fluttered backwards and came up in front of me strutting at 18-20 yards. I was told to wait til he stepped onto the fire lane because he would see the decoys and surely would come in. He managed to get in a low spot and get within 5yards of the fire lane without ever seeing the dekes. He turned back into the woods strutting again at 20yards. Apparently Jason could not see how close the bird was to me to say he dumba$$ pull the trigger and I wasn't smart enough to attempt a shot figuring this bird did everything these guys said so far, so I'm sure he will come onto the fire lane eventually. Needless to say he got bored and wandered off. We chased him down calling and could hear him strutting just over a ridge in front of us when we caught up. I got to the base of the ridge to start my "climb" and busted a deer from its bed who put the turkey on alert. I got half way up the ridge and was sneaking around the side when that dam deer was standing there waiting for me stomping its hooves and blowing away. The turkey was scared even more. I snuck up and saw the gobblers head wizz past a pile of sticks. As I tried to close the distance I stepped in a hole full of dead oak twigs which cracked and sent the turkey flying off to the next county.

We spent all weekend running and gunning, spent $200 on gas in 2 days running and gunning with no bird to show for it. We had a few other very close encounters. At one point we had a turkey chasing us around a 40acre piece of land we had permission to hunt but when we were setting up he got to close and must have seen us.

I realize I was able to encounter a lot of things other hunters don't get to this weekend and definitely gained more insight into turkey hunting. I just feel like such a loser for choking under pressure like that!! Anyhow it was an awesome weekend, I think the most fun was running and gunning hunting with no blinds and no real property boundaries, not to mention all of the time we spent in the timber and big woods away from agriculture where so many turkeys are seen and harvested.

Sorry for the long winded topic I had to get that off my chest.

It ain't just about killing... Sounds like a great weekend to me

Sounds like you had alot of fun!!! I couldn't even get a Tom to come close this past weekend. So I you guys did alot better than me. I will be giving it another try this weekend.
Top

Shrug it off man..Like others mentioned, it sounds like you had a really good time, and you were able to get close to some birds.

I wouldnt really say you choked either..Its not like you got turkey fever and werent able to hit was you were shooting at or something..It sounds like there was simply some miscommunication (and hey, you were just doing what you were told).
Top

I agree with others. Stick with it, and maybe next week will be your time!
Top

dan wrote:It ain't just about killing... Sounds like a great weekend to me 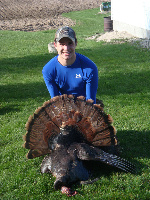 going to the range and seeing just how far you can make a successful kill shot with some turkey targets is a great way to learn how far you can truly shoot and it will give you confidence as well. Also try to pace off some distances if possible when scouting or whenever ya can to try and learn how far distances really are. Practice practice practice and your very lucky to see all the birds ya did, sounds like a great weekend and cant wait till we can get a crack at it next week.
Top
Post Reply
7 posts • Page 1 of 1