Has anyone experienced non-traditional bedding (either from wind or elevation) on heavily pressured areas where you think the deer are bedding there due to the pressure? I hunted a public piece for the first time last year where the access is from the west, and you can go quite a ways until you hit a river to the east. Close to the river is a wooded hill to the north. This hill has a point that runs to the east which drops off by the river. There are multiple crop fields to the south. I had pictures of this big 10 during summer in the field closest to the hill, so I figured the buck was bedding up there on the point.

Opening week I went to the west part of the field with a SE wind. Traditional hill-based bedding would say that buck wouldn't bed there because he would want a westerly wind to bed on a point that runs to the east. But my thought process was, because the only access to this area is to the south of the hill, deer might be bedding on a non-traditional wind because hunters are always coming from that same trail. Sure enough he came by me, but I wasn't able to get a shot. Later in the season after I tagged out I got more pictures of him up on the hill.

Has anyone else used non-traditional winds by taking advantage of access pressure?
You do not have the required permissions to view the files attached to this post. 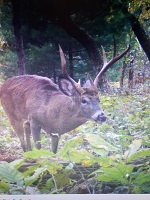 I think older bucks will bed wherever they feel safest from predators. Since we are the primary predator for part of the year, I believe their bedding is chosen according to the pressure. I know of one specific area I hunt which is also smaller in acreage that was absolutely pounded by bow hunters last year. I struggled to find the better bucks except for the very first day and pretty much wrote it off halfway through the season. But, I went back in there post season to figure out what the pressure had done. The chosen buck bedding turned out to be the flatter, bamboo like, limited tree cover area much closer to the road. Not on the higher ridge, small swamp or river bottom they had been using in years past. It was surprising to me because they can't see far at all laying in that stuff.

Your on to something with that buck. The ridge is apparently the safest place for him to hold tight or slip out to avoid hunting pressure no matter the wind direction. It may be one of those situations where he lays on that ridge watching/smelling for danger. So long as he's not bothered, he goes about his business.
Shoot Straight
Top
Post Reply
2 posts • Page 1 of 1