So this was the kids 2nd year going for a turkey. Last year was fun, we heard lots of birds in the distance but never had one of those blood pumping encounters I was hoping to provide him with. Also I took him to a spot I usually hunt which is quite a hike.

This year I found a place to take him that is much better for taking a kid. The good turkey habitat is close the roads, easy walking and was I pleasantly surprised that the place was full of birds.

I got out there the afternoon before the hunt and found the same gobbler with the same group of hens in the same spot as they were 2 weeks prior. I made a guess on where they were going to go roost, circled around and picked out a spot to sit for the morning. Then circled back around and glassed the birds and watched him strut with his hens right past the tree I picked out and then gobble his head off from the roost trees.

So we got in extra early in the morning, got all settled in. About an hour before sunrise birds started sounding off all around us, but all several hundred yards away. After 10-15 mins of steady gobbling and still not hearing ‘our bird’, I wondered if a pack of hogs or something bumped him off his roost during the night. But he must have just been sleepy, it took a donkey on neighboring property making, whatever that noise is called that they make, super loud to get him to gobble. But once he started, boy did he talk good.

Long story short he hit the ground just out of sight and shut up for about 15 mins. Then started gobbling again. A little putting and some scratching sucked the hens right to us dragging him behind gobbling and strutting.

They swung around a little more to our left than I anticipated and we had to reposition slightly which put the hens on alert and I guessed the gobbler was about 35 yards which was supposed to be max range, he shot and the bird dropped like a stone. Went to pick him up and rangefind back to tree it was 43 yards.

just glad it all went well, would have felt awful if he wounded a bird because I misjudged the yardage. 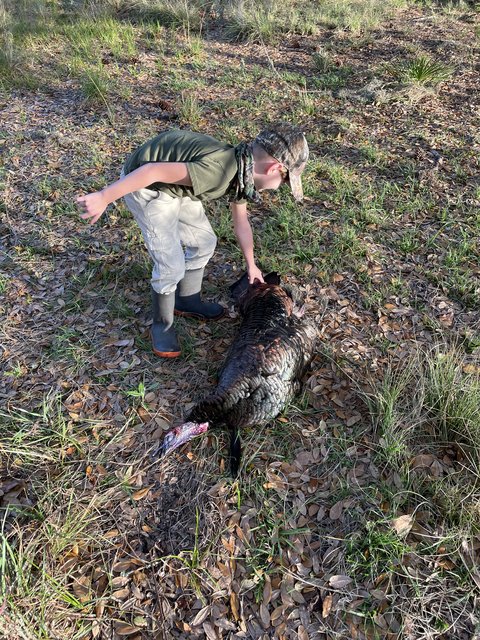 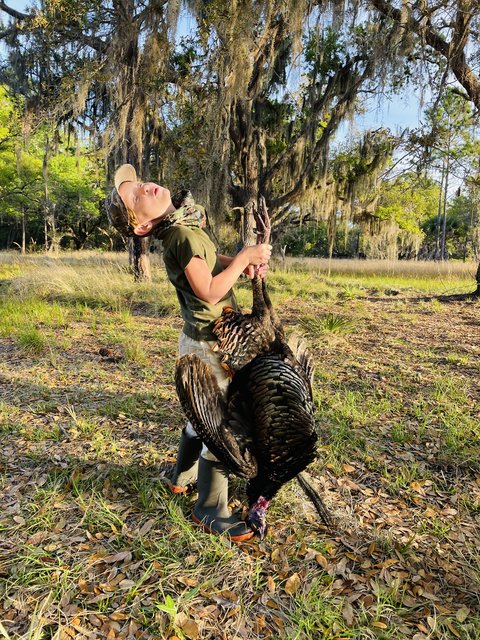 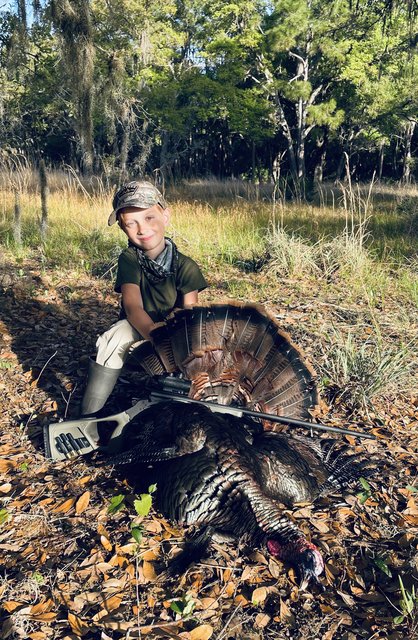 Wow, what a great story and pictures of your son's first gobbler, impressive!

What gun is he shooting 20-gauge? Sharp looking shotgun. 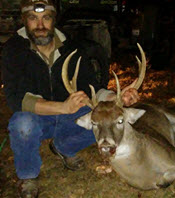 Thanks guys! What a blast.

P&YBuck1 wrote:Wow, what a great story and pictures of your son's first gobbler, impressive!

What gun is he shooting 20-gauge? Sharp looking shotgun.

Congratulations your son and proud dad!

It’s actually a youth .410 ‘tuffy’ made by Rossi. It’s made for turkey hunting with TSS and it is pretty fantastic for a cheap little gun. It was a great investment for me since I have 2 other younger kids so I hope this gun gets a lot of use!
No Shortcuts. No Excuses. No Regrets.
Everybody's selling dreams. I'm too cheap to buy one.

Congrats!
“The master has failed more times than the beginner has even tried.”
Top