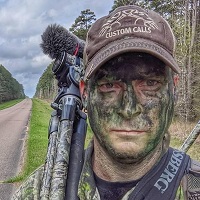 I've killed a lot of turkeys in Minnesota but none quite like the one that my daughter killed. Although we were hunting in the Eastern subspecies range, I was told that Merriam's were introduced to the area many years ago but none survived. It is believed that some of the DNA of the Merriam's transplants are still present in the resident Eastern flock and the traits pop up from time to time. Case in point.