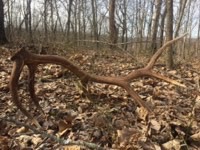 Hey guys, my papa has killed 4 nice bucks in the last 5 years hunting in the Appalachian mountains in the worst zone in the state of Ky. He has killed a lot more than that though. This brings me to my question, is papa wrong? I seen 3 doe today around 8:30 and 1 around 8:38. They just passed through, eating very little. I hear the rut is on and my uncle has seen proof from what he told papa. I was not planning on hunting there tomorrow because I have read so much on here about the first sit being so important. The wind was in my favor and the deer did not seem to have any idea whatsoever. What would you experience beast killers do? Thanks for your time and help.
Last edited by Ky mountain man on Wed Nov 18, 2020 8:56 am, edited 1 time in total.

So I think most of us here would agree....the first sit is often the best.....


Early and late season hunting mature buck beds on pressured lands...the gig is often up even if you didn't see anything. Mature bucks just don't tolerate you sitting 100 yards from their bed and stinking up their house.


During the rut, my opinion is if you are seeing the does, keep sitting it. I often try to tread as light as possible to try to minimize my disturbance to the does. Eventually, things might dry up. That's when I move on. Or if I'm just not seeing the caliber of buck I'm looking for in an area.


There are some guys that have GREAT rut travel routes where they can get in clean and not disturb anything. They can hunt those spots regularly and not bother anything.


Travel corridors and rut funnels and such can take a good bit of pressure because you're often seeing traveling bucks. They often times don't live there. They are passing through searching for love.


A lot of this depends on what phase of the rut you're deer are in. Which I'm learning separates guys that capitalize on the rut vs guys that stand on the sidelines. Depending on what the deer are actually doing, it may make more sense to hunt differently. If it seems the bucks are tending does and locking down, I think you're better off getting right in the doe bedding or between doe bedding and their food. If the bucks are seeking and wandering looking for love, travel corridors and rut funnels are usually where I wanna be.

Not all bucks tend and lock down at the same time so those corridors and funnels can remain pretty decent spots.
Top

If you aren’t blowing the deer out or getting detected and if your entry and exit are such that the deer don’t detect you’ve been there then you are good. Some of the places I hunt what I’ve seen is the more I hunt the less deer I see. It’s not necessarily the 2nd hunt or the 3rd but each hunt isn’t the same spot if over a short period of time, I see less and less deer until it gets to zero. However, if I space my hunts out by at at least a couple weeks there is a lot less impact.
"One of the chief attractions of the life of the wilderness is its rugged and stalwart democracy; there every man stands for what he actually is and can show himself to be." — Theodore Roosevelt, 1893
Top

Ask papa - he knows how to hunt the hills.

And, if you are seeing deer, keep hunting. If you aren't hunt somewhere else.
Top

Papa is not wrong if he is putting down bucks. Maybe he doesn't even know why his spots are good but has a knack for hunting hills that can't be explained. Maybe he knows exactly what he is doing. I would be picking his brain and try and figure out what he knows, maybe both of you watching a hill country dvd together could be a fun experience.
Top

Thanks everyone, I went back the next day and did not see anything....so Papa was wrong!

I did get one yesterday though! Public land mountain buck from the ground! Papa still has not got his yet, but give it time. It was a hard drag and I tore up my front bumper brackets in the process getting it out of the holler, haha.
You do not have the required permissions to view the files attached to this post.
2 Corinthians 5:7 KJV

Way to get it done, congrats!
True knowledge exists in knowing that you know nothing.
Top