This forum section is for the select few who believe in hard work and refuse to “Buy” success.
Post Reply
First unread post • 2 posts • Page 1 of 1

Hey guys, I'm new to the forum. This year will be my first fully "mobile" season to hunt. In previous years I've had the luxury of hunting private land and in Texas on private, corn is king. I opted to get off of my lease to better myself as a hunter. I felt that the way I was hunting, I was dependant on the deer coming to me rather than the other way around. So I got off of my lease and dedicated myself to spending the season on public land to challenge myself to become a better hunter.

I've gotten some information from a friend of mine about a good buck that he had an encounter with last October on a specific point off of the lake. He had trail camera photos of the deer all throughout October last year in this same area but at some point the deer left the area and didn't return back. After doing some scouting, I believe that the deer is bedding on the tip of the point during a south/south east wind. This would support the theory that the deer would be in the area during October but gone towards the end of the month or beginning of November being that we traditionally see predominantly south winds until the end of October or beginning of November. Also I could believe that with my buddy frequenting the area during last bow season I believe he could've pushed the deer out of the area from being sloppy. However I'm confused about the bedding area. I'm no expert at this, but in my experience I would find it hard to believe that a buck would be bedded on a narrow point like that, with the lake being a fairly popular fishery. It's hardly 30 yards wide at the spot of the bed and with the right angle he could be spotted from a boat. The bed did but up to a isolated patch of brush. This allowed for visual cover from the back side facing the main part of the lake, and cover on the sides. But allowed for a view of each side of the point leading to his bed. The only escape route is either down one side or the other of the point or to swim the cove to the next point over. To my knowledge this deer is still alive today. But I do not know for certain. The bed seemed to be being used recently, but not for a few days atleast as best as I could tell.

My thought is to wait for a day where I believe he would be using the bedding area. I believe it would have to be a south or south east wind. I previously accessed the area by boat and parked on the tip of the point, but for hunting purposes this would not be acceptable. I can access it by foot, or I can boat to a different point on the shoreline and pack in from there. Ideally, I would be looking for a day where the wind would have swapped from a south to north between the morning and evening and try to catch him coming out of the bed without the wind advantage.

My question to you fellow beasts, is what do you think of my plan? It feels pretty typical, but I'm curious of what y'all could add that might give me an opportunity outside of the one situation that I'm hoping to happen on a day that I'm able to hunt. I'm aware of the idea of hunting just off winds, but have no prior experience or knowledge on the matter. Any help is appreciated, and hello to all from East Texas!
You do not have the required permissions to view the files attached to this post. 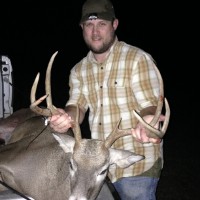 Re: New to the Beast, Texas Public land

As a fellow texan (central texas) that also recently got off his lease to focus on hunting public land, I'm right there with you in feeling that I'm just now starting to truly hunt. I've got a lot great memories of sitting in a box blind over a corn feeder, but it gets pretty boring if you hunt that way long enough. I killed a decent 8-pointer last year on public with my rifle, and while it wasn't easy, I will say that I've never been more proud of a hunt that I am of that one. I've killed bigger, but this buck was hard earned. Keep at it, and you'll soon be rewarded with a similar experience of your own.

As far as your question, I think you're on the right path. I wouldn't bother checking the bed for sign. Unless the buck is regularly swimming the cove to exit, he has to come down the penisula and you should be able to find enough sign in such a narrow area to verify that he's in there. I do think it is a bit of an odd spot for a buck to bed, but if you've got sign and photos then he must be using it. As far as stand placement, my first plan would be to wait for a true south wind, southwest would be even better, and I'd set up along the east shore of the penisula with my wind blowing out over the cove. If you've seen a video of Dan tossing milkweed while on stand, he pinpoints where deer walking a certain trail will get his scent. He then points right at the spot the milkweed is crossing the trail and says something like, "if he comes down this trail, I've got to kill him before he gets right there." If you can do that, I'd try to hang where I had a short shot opportunity, for a just-off wind, in case the deer flanked me along the east shoreline. This way I'd be set up a little more into the mainland of the peninsula and could shoot a little farther across it. It looks like a southwest wind would make it a little easier to get that just-off wind shot angle. Where the cursor's crosshairs are at on your image would be a good spot because the shoreline cuts to the northwest just a bit after that spot putting your wind out over the water quicker.

One last thing, everywhere I've hunted in Texas has had a prevailing southerly wind. Even in winter, when it shifts with a front, it never blows out of the north for more than about 3 days. I would say that even in November and December the wind is still out of the south more days than it is out of any other direction. That is why most all of the primary bedding areas that I find are set up for a south wind. They'll move bedding areas when the wind changes but move right back into the primary when the south wind returns. Just something to think of in regards to the buck leaving the area later in the season last year - I think its more likely that your friend pushed him out than did the changing wind patterns.

Hope that helps and maybe you'll get a few replies from some of the more experienced beasts soon. Happy hunting, looking forward to hearing how this works out for you.
Top
Post Reply
2 posts • Page 1 of 1