Scent - human or not?

Hodag Hunter wrote:I thought bear could smell better than deer? Can't remember where I read that????

I've always thought that too but just based off of my own experiences.

I also agree with Stanley and Dans points they made. You can't cover a humans scent or mask It. It's either their or It Isn't.

Great Info Dan with the cat too. A predator they are, just like us.
http://www.enigmacamo.com/
Top

I always (never hunted them) heard bears sense of smell was CONSIDERABLY better than a whitetail's???? I've even read their olfactory system is the best of ANY mammal.
Lateral Bowhunter
Top

I will have to check on bears sense of smell, I could be wrong, but I thought I read it was simalar to a dogs.
https://www.youtube.com/channel/UCAb0Ia ... TAslJ6D32w

Heck....I could be wrong, too. It just stuck in my head (what I thought I read), though.

Reminds me of going to my buddy's land up in VA/WV. They have 2,400ac. up there.....and a rustic old house on one side of the mountain. They have running water....but no indoor toilet. Yep. Outhouse.

So, to combat the "aroma", he pours a bottle of Pine-Sol down the hole when he arrives. He asked me one year if it smelled good. I said.....it smells like somebody pooped a Christmas tree.

What about vultures? Don't they smell rotting flesh from a long ways off? I know this is a bit off topic, but does anybody have any knowledge of how those birds find food?
"Its about taking the right shot at the right time with good equipment." Dan Infalt
Top

One time this fall while on the stand, the neighbor was combing corn in a field, on the opposite ridge I was sitting on. he was probably 1/3 of a mile away. I was down wind of him, and could smell the diesel exhust from the combine. It got me to thinking that a deer could probably smell the operator as well. I had a doe and two year and a half bucks up wind of me, and down wind of the combine. I was sitting over a water hole. These young deer should no concern, an older deer who knows. Just food for thought.
Top

Great thread. I have hunted hogs several times and think they can smell you like 7 miles away. Combined with their intelligence they can be tough.

One other thing about deer smelling humans, a hunter who gets excited as a deer is headed his way, has a chemistry change in his body. Adrenalin flows and I believe this is detectable by a deer, hence they know when you are a threat.

You have heard a dog can smell fear, I believe this is actually true and similar to what I described above.

Nerological studies of the brain show that all kinds of chemicals are released into our bodies with different emotions and thoughts. Example: laughter will release good stuff, fear releases adreanilin for fight or flight response, worry releases a whole different set.

My point is, you better have the wind because that deer will smell what you are thinking. 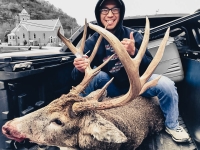 I just saw on my local news this morning this kid who has a dog that can smell the sugar level in her blood. She has severe diabetes. The dog alerts caretaker(mom or teacher) when the childs blood should be checked. If a dog can figure that out and they dont smell as good as deer. It really made me cock my head for a second.

Mike wrote:This doesn't answer any specific questions but I do find it interesting that it seems native americans practiced scent control

From a paragraph entitled Ishi's method of hunting:

"Having decided these and other questions,
he prepared for the hunt. He would eat no
fish the day before the hunt, and smoke no
tobacco, for these odors are detected a great
way off. He rose early, bathed in the creek,
rubbed himself with the aromatic leaves of
yerba buena, washed out his mouth, drank
water, but ate no food. Dressed in a loin
cloth, but without shirt, leggings or moccasins,
he set out, bow and quiver at his side. He
said that clothing made too much noise in the
brush, and naturally one is more cautious in
his movements when reminded by his sensitive
hide that he is touching a sharp twig."

From my understanding native americans also did dances and carried lucky stones with them to have greater luck with killing deer... Just cause an indian long ago believed something, or did a ritual don't mean that is why he was a good killer. I am part Menomonee by the way

Singing Bridge wrote: There are so many variables that it makes it fun to hypothesize.

The preceding is strictly a matter of my opinion, and in no way reflects the ideologies of fellow Beasts.

I agree. I would also like to add that this is a unique site because everyone is allowed to voice their opinions without fights breaking out like on other sites. I don't always agree with everything but that doesn't make me right. We all experience different things in the woods and it's fun to learn from everyones experiences.

Great point We are all individuals so there should be some dissimilar ideas among us. I don't expect everyone to agree with me. One guy keeps his gun oiled and cased the other guy uses his gun for a canoe paddle. 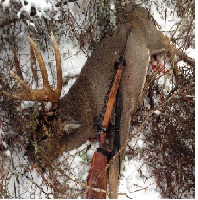 This last couple days, some awesome older threads have been popping up. As a new member, I want to thank those who are bringing them back to life. Some of the best information being on the forefront of the page!

This was a great read.

The scientific community seems to agree that the bear has the best sense of smell for land animals anyway. Polar bears have been documented to smell seals through several feet of sea ice and black bears can scent a road kill many miles upwind. Deer cannot smell nearly that good but they are far closer to bears than a human nose so its a decent comparison IMO.

I have had deer smell me at 300 yards. I also have had a couple deer walk right through my scent stream at 20 yards and not twitch. Not sure if there is that big of a variation in deer noses or the ones that were close to me were just dumb. I agree it is a learned trait but I also think all predators smell similar (not the same, just similar based on meat eating), so they don't necessarily need to have smelled a human before to be scared.