Scent - human or not?

About sent it's clear on other reply here...
About behavior I did observe roe doe Run away and hide at the approach of a red deer and coming back after when she was reassured...
It is clear that she had smelt him before hearing(understanding) him(it)...and he was not a predator...
For me pray animal have to be very prudent for them survive and thy learn very quickly about danger (some how don't die very quick too).

I want to share One more observation relating to a deers instinctive reaction to predator scent.
A couple years ago I was hunting in Iowa on a friends farm and saw a feral cat entering a field from the woods. There were deer in the field. when the cat got up wind of the deer they freaked out and ran off snorting. The cat stayed in the brush very near a deer access to the field, and every deer that passed it that evening either spooked, or went on high alert when they got down wind...
You sure don't see them react that way to bunny and turkey scent...
https://www.youtube.com/channel/UCAb0Ia ... TAslJ6D32w

magicman54494 wrote:How a deer reacts to scent is a learned behavior. From birth on deer are subjected to scents and the results of that scent. It's the results of that scent that determine how deer will react to that scent in the future.
I believe they catagorize scents into catagories such as good and bad. If they smell something and have a bad encounter they will associate that smell with danger. If the result was good they will react accordingly in the future.

I agree with magicman on this. I also wanted to add that I think deer have the intuition to know when something is wrong. I read a book called "The gift of fear." It relates to humans and not deer, but I think some of the info in the book can be applied to all species.

It talks about how no sudden assault on a person has been unexpected. To qualify that statement, the whole book goes into how every person interviewed had a "feeling" before they were attacked. More or less, the hairs stood up on their neck prior to the attack. When they looked back, they may have noticed very minor things being slightly off, but they would usually just dismiss that feeling as them being paranoid. Humans have almost lost the ability to sense fear in todays society. The book obviously goes into much more detail, but thats the jest of it. (BTW, I recommend this book to everyone!!!)

I think animals have that intuition to know when something is not right. On top of the odor, they may notice subtle differences in their surroundings....the surroundings they occupy EVERY DAY!!

Could it be a 6th sense? Maybe when we are hunting (in predator mode), we give off "vibes" that prey pick up on. I think we've all been in the situation where everything seems to be in our favor and the deer just "senses" something and dosen't bust out of there, but just turns around and leaves.
Top

For sure deer, because of how they are raised and their mothers were raised, has a lot to do with how they "respect" human scent. Not necessarily fear it, but always keep it in the equation whenever in it's presence.
Magic & Dan both make good points on the different ways they've experienced deer reaction to human scent. I will add that I have experienced bucks scenting my entrance path that would normally turn any deer inside out and only react with nonchalance, telling me that by the amount or strenghth of my scent being less has given that buck a false impression of more time passing than actually had. His "respect" for human scent may or may not have him skirt this area in the future, but for the present time would have been shootable. And that's why we do what we do.
http://www.stealthoutdoors.com/
Top

I think the mothers of the fawns pass on the info of what to avoid and when to avoid it. There's nothing craftier than an old doe.
A buck will see you three times, and hear you twice, but he's only gonna smell you once.
Top

I have hunted in and around houses and found the deer there are not as easy as I thought they would be. When somebody walked out in their yard, the deer would stop, observe them and as long as they stayed in the cut grass area, the deer went on their way like all was good. The minute they hit scent in the woods, they were acting like they were shot out of a cannon. I believe its the same way in many areas, where deer become accustom to certain individuals daily routines. I also hunted a friends farm where his mom would walk a loop every day. I watched deer cross her trail with no care at all, then get down wind of me and be gone. Did she smell different and they identified her scent as a non threat? I also talked with guys that ran a park hunt. I dont remember the exact details, but I seem to recall it took like 3 days of hunting to shut the deer down. The deer were not used to the human scent where hunters were leaving it. They also said they felt more deer could have been killed, had hunters walked around on the ground, versus sitting in tree's. The deer picked up on the new behavior and didn't like it. As for stepping in cow pie's, years ago I did that. Today I dont believe it works, based off of what I have learned from talking with dog trainers. The smoking thing, that not doing anything either. I think we all have had a situation or two where the deer didnt spook from our scent. However more often then not, its best to play the wind in your favor. Also worth noting Charles Alsheimer had/has a pen with captive deer that he used for research. During the rut he noticed all the bucks in the pen were bedding against the one side of the pen. He said they were on the side the wind was coming from. He felt those bucks could smell a doe(s) in heat on the ridge that was some 300yds up wind of them. Can a deer smell you 300yds away, maybe yes, maybe no. If they can, it sure makes ya wonder how anybody gets a crack at one.
"Its about taking the right shot at the right time with good equipment." Dan Infalt
Top 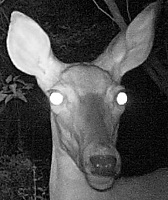 I know this is not the majority opinion around here, but I do believe that scent reducing strategies can be helpful. Alot of the public land that I hunt is overrun with humans - duck hunters, pheasant hunters, deer hunters, walkers, and the WMA staff. The deer are pretty accustomed to smelling humans. I believe the deer have a good enough nose that they can tell the age and concentration of scent among other things. So if I reduce my human odor, I have a better chance of not spooking deer downwind. I believe that the deer smell me, but they believe that either the scent is old because it is a faint smell or that the scent is far way because of the concentration. I believe this is the case because some of my private land deer that are less accustomed to human scent do not tolerate my pressence to the degree that my public land deer do. My two cents.


Like Dan mentioned, I use all this human intrusion to my advantage by accessing the majority of my site via well used trails. In certain areas, deer will cut my path and not spook.
"In the deed, the glory"
Top

Stanley wrote:Putting it in terms most people can understand, scent to a deer is like a rainbow. They can smell all the colors of the rainbow not just the red or blue or yellow. If you throw in another color brown(cow crap) they still smell the yellow and red along with the brown (cow crap). I think most hunters don't understand this about a deers sense of smell. They think the cow crap covers the other scents , but it really doesn't.

Exactly!
Cow crap, smoke, fox urine, etc... Nothing will cover human scent. It might to a human, but not to a deer.
People seem to get stuck in thinking deer smell the same way we do, but in fact, they have not only millions of time better smell, they also have a vomernasel organ, which is something most people don't understand. A deers nose divides the odors so the deer can smell each one individually. Douse yourself in gas and a deer will smell the gas, and you.
https://www.youtube.com/channel/UCAb0Ia ... TAslJ6D32w

I read somewhere that in the right conditions a deer can smell you 1/4 mile away. I've had them smell me 200 yards away
Top

wmihunter wrote:I read somewhere that in the right conditions a deer can smell you 1/4 mile away. I've had them smell me 200 yards away

I read a study on bears ( deer can smell better than bears ) where they radio collered bears and watched where they went after leaving there dens... The study said the bears would look for food and would turn and go straight to it when down wind. The longest distance in those bears was one that traveled around 10 miles from straight downwind straight to a road killed deer...
At Mike Foss's bear camp I brought that up with a bear reasearch scientist. He said no dougbt they could smell a road kill at 10 miles.
https://www.youtube.com/channel/UCAb0Ia ... TAslJ6D32w

I thought bear could smell better than deer? Can't remember where I read that????