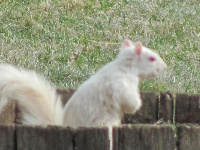 The fatal attack could be the first on U.S. soil in more than 50 years. Attacks by wild wolves, rather than wolves kept as pets, are extremely rare, numbering no more than a handful a decade, mostly in Canada and Russia.

Candice Berner, a 32-year-old teacher and avid jogger who traveled to several rural schools in Alaska, was found dead on Monday along a road near Chignik Lake, a Native Alutiiq village about 475 miles southwest of Anchorage.

Snowmobilers found her severely mauled body in a pool of blood and multiple wolf tracks in the snow, according to officials. The State Medical Examiner said the cause of death was "multiple injuries due to animal mauling."

Chignik Lake locals had expressed fears about wolf sightings in the area, state troopers said. The Alaska Department of Fish and Game plans a special meeting to hear their concerns.

State troopers said there were no records of deadly wolf maulings in Alaska. Bruce Woods, spokesman for the U.S. Fish and Wildlife Service, said fatal attacks are extremely rare worldwide

thats sucks........i wouldnt be rolling around alaska w/out some heat packed....
Top

That's sad. Wonder if there was foul play involved that the mauling covered and was not found with the autopsy? If so, coulda been the perfect crime. If not, everyone needs to be a bit more cautious in the woods where ever they are when it is known wolves are habitating the area.
For God so loved the world, that he gave his only begotten Son, that whosever believeth in him should not perish, but have everlasting life.John 3:16 KJV
Top

May God Bless her soul along with her family.

A pack of wolves that have grown accustomed to humans is nothing to take lightly. I pray I'm wrong, but it's only a matter of time when a similar attack happens in the midwest.
Top

GIVE ME LIBERTY OR GIVE ME DEATH!
Top
Post Reply
6 posts • Page 1 of 1