Tbunao took me and my girlfriend on a death march today, post hole-ing through 2 feet of snow. He thought he showed us, until I saw this once in a lifetime find. I found this whitetail shed, as pictured, 7ft up a pine tree. It was chewed pretty heavily, we are guessing a squirrel hauled it up there.

Funny... my wife calls me the "hang dangler" 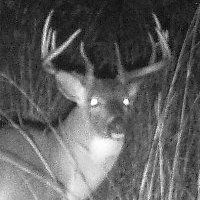 Doesn’t Newburg put sheds up in trees like that?
Top

Thats a cool find!! I was thinking maybe someone found before and hang it there?!

muddy wrote:Funny... my wife calls me the "hang dangler"

Yea, I have no idea if a person put it up there, a squirrel, porcupine, eagle...the world will never know.

JakeB wrote:Doesn’t Newburg put sheds up in trees like that?

He does, and this was in Montana, so always a possibility!

backstraps wrote:Thats a cool find!! I was thinking maybe someone found before and hang it there?!

Yea, could have been a person for sure. We were a few miles in on a pretty remote piece, but every time I think "no one has been in here" I see some sign of people. Most of the snow is gone, but we were in the foothills of some mountains. A few times, in drifted areas, I went up to the top of my thigh. Most of the snow was 6-24" though.
http://going4brokeoutdoors.com/
https://www.instagram.com/going4brokeoutdoors/
https://www.youtube.com/c/Going4BrokeOutdoors
Top
Post Reply
6 posts • Page 1 of 1