Hopefully the attached pic shows up. I scouted this area today and found very obvious bucks beds where every marker is. Each bed is on an elevated hump under a tree in the cattails. The problem is the bucks never and I mean never leave the cover of the cattails until after dark. I've killed one buck in there and I had to stalk to the bed in a wind storm to make it happen. Does anyone have any ideas on how I could see these bucks in the daylight without having to physically try and sneak into the bed ?
You do not have the required permissions to view the files attached to this post.

Either stalk when its windy or maybe drive it with friends. If they won't leave until after dark you don't have much choice. You either have to force them out early or sneak in there. Can you intercept them before they enter the bed in the morning? I've thought of launching M-80's at deer with a slingshot but I don't think its legal. Plus with my luck I'd start a wildfire.
Top

country_gbrony wrote:Either stalk when its windy or maybe drive it with friends. If they won't leave until after dark you don't have much choice. You either have to force them out early or sneak in there. Can you intercept them before they enter the bed in the morning? I've thought of launching M-80's at deer with a slingshot but I don't think its legal. Plus with my luck I'd start a wildfire.

I've tried some morning sets but they get back to their beds again way before light, I've been in there 2 hours before light and crossed tracks heading back to the beds. I actually killed one last year using the wind to stalk in, it works it's just my rate of busting them is obviously pretty high. A drive could work, the only problem is they have endless exit trails into about a thousand acres of cattails so it would be hard to cover .
Top

I'm sure they have preferred exit trails probably based on wind direction. You'll learn something for every failed attempt. Dan also would carry a step ladder into the cattails for a vantage point. Might work for a drive plus your shooting down into the ground. I would keep trying new things until something sticks. Something else you can do is stink up and disturb that area until you force them into an area that is more huntable for you. When are you hunting them? Early season, rut or late? Early season you probably won't beat them back to bedding. The rut you might catch them coming to bed late and in the late season they might leave early cause they are hungry and pressure is lighter. Gonna have to give it some sits and record all your data. If in the end you've tried a million things and nothing works you might have to move on and find other deer.
Top

Another trick is to mount a white flash camera right over the beds you don't want them using. You can use a 1x1 stake and mount the camera to it. The continued flashing will make a mature buck move beds.
Top 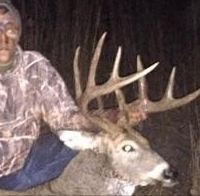 I would try figuring out their main exit trails and set up on in...in the catts. Go slow and you can get within 50 yds. Have a small quartering-to/broadside sight window to see what it is while it’s coming at you, and an angled shooting lane for when the deer is quartering away as it’s walking past. Pretty important to either get off the main trail way back from where you’re going to set up, or..more preferably, come in from a totally different way than the deer are going to exit so when that first basket rack comes out and gets past your shooting lane, he doesn’t get your scent trail and freak out
How bad do you want it?
Top
Post Reply
7 posts • Page 1 of 1