Version of this was posted to FB last night in case some have seen it.

I learned to hunt through trials, failures, books, and the teachings from this forum. I truly appreciate everything Dan and the rest of you have done for hunters like me who did not get brought up with hunting and have had to figure it out on our own. I now have 5 seasons under my belt. I've always been successful and proud of my kills, but this year I finally managed to put down a deer I've had years of history with. A truly mature deer. One with the most intense palmation I've ever seen and so much character that I couldn't help but share the story and photos with the people that helped me get this far.

Cell phone pictures don't do this animal justice. His rack is truly unique and he is built like a horse. I've been chasing this buck for 2+ years with trail cams and scouting and finally got an opportunity at him last night. It appears the right side of his rack changed a bit from 2018, but the left stayed generally the same. Last year his sides matched, whereas this year the right size is even more palmated, but without the sticker and a bit smaller. The gnarly eye gouger from the base of his antler is also super cool.

I had very limited time to hunt this year due to work demands. I missed all of archery season only managing to get out on a few short scouting/trail cam runs. After a half day at work on Nov 14th I snuck out and got my mobile stand setup by 2pm giving me about 3 hours of light. I only had a few more days open in my schedule to hunt this season so after two short hunts on the outskirts of this bucks assumed bedding area/territory I decided to throw caution to the wind and dive into the heart of it. I promised myself not to shoot anything other than an exceptional deer so I wasn't too concerned about the drag out at the time.

I've been scouting this highly pressured SE Manitoba public forest for years. There has always been high deer activity/sign in the area, but a 2018 logging operation clear cut a large swath of the forest I hunted. After a short session of cursing and panic continued scouting revealed that the clearcut actually concentrated the deer movement/bedding to a narrow strip of forest between a marshy creek and the clear cut. There were several other strips of forest branching off the one I was in leading through the clear cut. The edges along the marsh and between the clear cut and the forest were thick and often had standing water where the deer loved to bed. In between the two thick edges was a relatively open strip of pines that the deer felt safe moving through. I figured bucks would be bedded along the strip and would likely be cruising through it looking for does this time of year. I've even got a photo of this buck bedded in front of a camera I ran June-Oct and several photos of him moving about during day light in nearby areas. I knew he felt safe here. I positioned myself with the wind to my face on the edge closest to the clear cut. In front of me were several shooting lanes through the pines with a good view of the marsh. Behind me was a large section of shallow frozen standing water. Based on tracks in the snow I knew deer avoided this area as they would break through the 1" of ice allowing me not to worry about things sneaking around downwind of me.

Forty five minutes into my sit I spotted a big bodied deer moving away from me through the trees. I believe he got up from a nearby bed that was just outside my field of view. I quickly gave him a grunt, but he ignored that and walked out of sight. I then rattled at him (which I've never had much success with and generally avoid) and I immediately saw him charging towards me through the trees. I have never seen an aggressive reaction like that to a rattle bag. That alone made the hunt worth it. The second I stopped rattling to get my rifle into position (of course he came in on my right which is awkward AF for me) he stopped moving. I couldn't see him. After a few minutes I grunted again. After another 5 minutes I saw him slowly walking away again. A short rattle turned him back towards me. I panicked and tried to get into position and he stopped again as soon as the rattling stopped. All I could see was his giant . At this point I decided to stay in a semi-shooting position while ratting with my left hand against my lap. This worked and he finally took enough small slow careful steps towards me to come into a clearing. This is when I realized he was the deer I've been seeing all this time on my trail cameras. I did everything I could to calm myself down before taking the shot, but my heart was racing and my left leg was shaking.

After getting down from the stand I instantly found the best blood trail one could ask for and he wasn't far off.

After a few photos I field dressed him and began the longest and hardest drag I've ever endured over the thickest and most gnarly terrain with the biggest deer i've ever harvested. There was no place I would have rather been. After getting to the truck for the first time ever I had issues loading a deer into the bed by myself. Normally I grab them by the antlers and drag them up. This time it took 30 minutes of trail, error, a bit of cursing, and various rope contraptions. I don't know if I was exhausted from the drag or just getting old!
You do not have the required permissions to view the files attached to this post.

FYI - I moved this post from the big buck contest into the kill zone for Beast member vovamir. He accidentally posted this in the Big buck contest thread where no comments were allowed instead of posting in the kill zone. Congrats on the buck vovamir!!!!

Congrats on a phenomenal buck!! The palmation is awesome

Love that rack. Congrats on a great buck
Top

Awesome all the way around! Love the tack on that buck 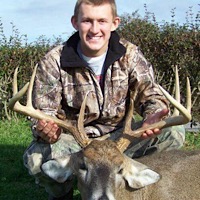 It always seems to coincide that those super freaky heavy bucks are connected to Manitoba. Co grats
http://www.iowawhitetail.com
Leading the way for habitat and management information