I just put out a trail camera for the first time in many years. I use to run cameras all the time and stopped because of multiple reasons. Anyway long story short Dans “weakest link” post got me thinking. I don’t have the time to be out scouting like I have in years past so maybe running the cameras can help me manage some of my time by narrowing things down faster.

I was hoping some of you would share some detailed trail camera strategies that help you save time or have proven successful? If I’m taking the time to run them I need to have a plan of use.

I had a property that was giving me fits. Keep in mind I can’t run cam on public, but I do have access to the neighboring private. The private is better pheasant ground than deer, but there is one good bedding thicket just off the public.

I’d been hunting that public since 2014, and had never laid eyes on a shooter during season. The only shooters I’d seen were during summer observations. I did run a cam over an apple pile just outside the private bedding thicket during late summer two years in a row, but never got anything even close to a shooter.

I was about ready to give up on the property, but decided to camera bomb the thicket during rut. I knew the big ones vacated their summer spots, and I knew the private thicket was pretty lackluster early on. So I tried a different time frame and put three in a fairly small area. I ended up getting 2 shooters in this bedding. One in the middle of the night, one during daylight. So that showed me the deer were in the area, I just needed to do more homework.

I stuck with it, scouted more, and observed more during summer months. Luckily I ended up patterning a bachelor group and killing a decent 10 there this year. I was close to a half mile from where I ran those cameras.

I often use cams to figure out spots that I question. Sometimes it’s in an inventory kind of way, but more often it’s in a tactical sense. If I’m not sure if a bedding area holds big bucks, I will place a cam invasively. I might screw it up for that year, but I’m using the intel for the following year anyway. I often use them to try and figure out how (and when) they enter and egress bedding.
Top

What are your goals for running cameras? I pretty much stick to inventory and/or knowing when a certain buck was on the property. i also pretty much only hunt farm country and take advantage of open/swinging gates and head lands of corn fields. Any of these that arent where you plan on hunting and get any human or farm implement traffic work excellent and can be checked fairly frequent without too many negative consequences. Im never looking for daylight pictures and even if I get them i dont care a whole lot really as they are typically random rut pictures. I rely on previous encounters and scouting to dictate where i hunt once i start getting the pictures im looking for.

I pretty much stick to these guide lines and don't get too caught up in placing them on scrapes or rub lines as its always just burnt that spot out too fast when trying to get pictures of specific bucks. I just got sick of getting one picture of the buck looking right at the camera, next was their hind end, and there was never a third.
Top

Trob my goal right now is inventory. In the future my plans are inventory but also similar to you in verifying a deer is using an area previously scouted. I need to use the cameras in an efficient way to help cover those times I’m not able to glass or scout. I am just trying to figure out best way to utilize cameras without feeling like I’m messing areas up. I am also in farm country and thanks for your reply
Top

live2hunt wrote:Trob my goal right now is inventory. In the future my plans are inventory but also similar to you in verifying a deer is using an area previously scouted. I need to use the cameras in an efficient way to help cover those times I’m not able to glass or scout. I am just trying to figure out best way to utilize cameras without feeling like I’m messing areas up. I am also in farm country and thanks for your reply

Go to the coop and get a few bags of loose salt and in the summer put cams on the bean edges trying to face them north. When they turn brown make a mock scrape on the edge. That's going to tell you everything you want to know as far as cam inventory. One cam might not be enough, dep on size of property.
Top 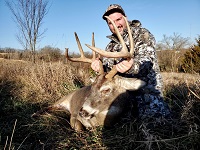 I think the ability to use salt or feed significantly changes ones strategy around cam use. Just be aware of that as it applies to your situation. We cannot in our state.

I use alot of cell cams now and supplement with regular cams. I place cell cams in the spots I believe I can get the most intel or usable intel out of. When I pick up on a buck, I then will use regular cams in between cell cam locations to rule in or out areas. Normally I'll start with destination/point source spots OR pinches or funnels in-between bedding and food...then start working backwards. I'd be lying if I said I avoid hanging cams in bedding areas (not necessarily over beds, but in the close area). I usually use cell cams for those as of the past two seasons - set them in late summer and let them roll all season long. But, I also hang over scrapes, travel corridors, doe bedding, etc.

One bedding area worked out really well this season and resulted in a kill on the first time in. The other not so much but that was more an outside factor of another hunter's pressure. However, that same property about 100-125 yards away, I was able to establish a food to bed pattern late season on another buck and killed him last day of gun season. The travel corridor has some small plotwork done and the buck was stopping there nearly every morning on way back from the farm field. This was not a first time in; however, it was a first time in based on that new pattern/behavior being demonstrated. Both of those hunts One early November, one in December, were done within the first 30 minutes of legal light - it's like they read the script as written by the cam.

Both kills were due in large to cell cams. My free time really dries up as hunting season kicks into high gear due to work requirements. These help me overcome that, honestly.

Another buck we had tracked, we were really narrowing down his use. I had a cam on a bedding area he used. He really challenged us because I cam bombed the area each of the past two seasons and reliably only picked him up on one cam. This year, I used that spot as a hub, and set cams around it - 7 in fact, within a 100 yard square area. He had two spots I couldn't really set on due to property lines, and guess what...he would show up on that central cam and not the other 7...so those cams really started to grow confidence he came in and out of two specific spots to get to this cell cam location. Unfortunately he was shot before we could make a late season move on him. That's life though.
http://www.pursuitoutdoors.com
Trail Camera Sales, Industry Updates, and Cam Troubleshooting - PM for HB pricing
Top 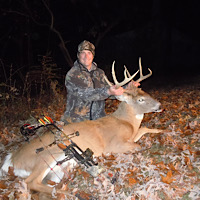 The way I use mine is I place them in areas I feel should be pretty good but don’t have any history on, put lithium batteries in them and a 32 gb card in them and don’t check them til after season. I am only concerned when the flurry of daylight activity starts. It lets me know approximately when I need to be in that area in subsequent years. Works pretty well. Keeps me out of the spot prior to the “right” time so I don’t pollute it to early.
Seems to hold pretty true from year to year from what I’ve seen. I target pinch points, etc.

Salt or feed are not an option.
Top

Were not allowed to hunt over it, not that it even gives an advantage. Seems strange there is a law against a natural mineral. I'd still go with bean edges and scrapes
Top
Post Reply
9 posts • Page 1 of 1