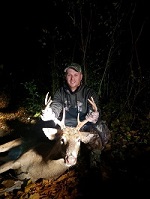 I've been off work since November 1st and I've been hunting harder that ever before. The past 8 days have been a grind. I was seeing deer on every sit but they were all small bucks. The woods I hunt was tore up with sign, new rubs and scrapes popping up daily, however it didn't appear to be mature deer making the sign. I had one buck come in at last light that I thought might of been a shooter but when I drew my bow I couldn't get on him, too dark.

I decided I needed some new scenery and moved to another property that I had no expectations with. It was just a tree lined farm ditch with no sizeable woods around, just a couple 6 acre tracks. I quickly scouted it and found a scrape line I decided to hunt. The problem was there were no trees where I could hang a tree stand. I got down into the crest of the ditch and made a make shift blind out of some dead tree branches and hunted on the ground. Since I knew I was going to be eye level with the deer and little cover to conceal me I decided to use my son's crossbow. That turned out to be a good decision. The buck approached opposite the way I expected him to and as he made a scrape I turned uncomfortably to avoid being detected by the buck to make the shot. Being that close on the ground with the buck making a scrape was really cool, with each stop of his hoof it made the ground shake, I could practically feel it. My scent was just missing him, (milkweed) as he finished making the scrape he started to get a little skittish. He was quartering hard to me and I made the 20 yard shot hitting perfectly.

I typically shoot a small fixed head out of my compound G5 Strikers. With the crossbow I was set up with Rage Hypodermics, my first deer with a Rage. The Rage did a good job, I instantly had a good blood trail and there wasn't an exit hole. The buck carried my bolt as he bulldozed his way into the corn, he made it 78 yards from impact to his death bed as measured by OnXhunt GPS.

I really don't know how old the buck is, but he had a huge body, just massive. I would guess 4 to 5 years old, but who knows. I wanted to weigh him but my process didn't have a scale . We guessed him to be close to 200 lbs after being field dressed.

After hunting the past 9 days my thoughts on the rut are things started to really pick up in my area around November 5th and I killed my buck on the 9th. I think things are just now really starting to heat up, at least in my area.

That is one heck of a buck! Congrats

Congrats man! I had been missing out on this timeframe before. Hopefully I can get on something before the action dies down.
Top

Hubba hubba!
" Most of us aren't defeated in one decisive battle. We are defeated one tiny, insignificant surrender at a time that chips away at who we should really be."