Fresh snow... Who is scouting?

Discuss the science of figuring out our prey through good detective work.
Post Reply
First unread post • 9 posts • Page 1 of 1

Fresh snow... Who is scouting?

Good time to get on a track and learn a thing or two about the travel and bedding patterns of bucks in your area... I have learned a lot about specific animals as well as general habits from tracking bucks in fresh snow. Its good to keep good notes about things like wind direction and bedding locations as well as where the buck heads and how he uses the wind before vs after he knows he is being tracked... If anybody goes out I would like to hear what you learned.

Was out most of the day Sat checking an area out from a different entrance direction. I knew from years past a buck or bucks bedded in the general vicinty near a major road. Very hard to sneak in from the "normal" parking area so had a buddy drop me off and drive the truck around and come back when I called him.

From topos, previous walks thru and aerial photos picked out two locations to check out in the blowing snow storm. Never made it to the second spot......found what I believe to be a buck bed. Single bed, rubs close by and only a single deer track in the general area.

Really wanted to explore more but since I have a open archery tag I backed out. It was evident that I didn't kick the deer up...it was on it's feet and gone well before I got there. Other areas showed a quite a few deer moving thru. I figured mostly does and fawns and cameras confirmed it to be true.

One camera had a smallish 2.5 year old buck showing around 4:15pm about every other day. Not really what I'm looking for, but intial goal for hunting back up here for the 1st time in years was a 2.5 or better. I may take him given the chance but not before hunting other locations a time or two.

Placed cameras in a few other locations with single deer crossing a road.....pretty evident these deer were crossing the road headed to an area with homes where I assume baiting is happening. These deer crossed the road well before dark so I only went in 50 yards, at the first good ambush location and placed cameras.

Should I have gone further and find the deers bed outright?.....at the time I thought no, since there is early enough movement already. After the tag is filled is when the miles will be put on the snowshoes.
Top

I would have to think you could get away with a little scouting in areas like S.E. Wisconsin right now with the high winds and drifting snow. I have to think it would eliminate most of your ground scent?
Is it blowing up north Hodag?
https://www.youtube.com/channel/UCAb0Ia ... TAslJ6D32w

Blowing and drifting pretty good. I left the Rhinelander area about 2:00 this afternoon. Sun came out, snow stopped, temp dropping and wind picked up. Figured I'd get busted tromping thru the bush.

Saturday was fun.....at times I couldn't see 30 yards in front of me with the snow and wind. Hoping I didn't burn the one good area I found.

The other spots are just crossing locations, don't have the beds pinned down.
Top

I made an attempt at coyote hunting friday night which turned out to be too dark to see any creatures but I stumbled around the farm in the dark finding all kinds of tracks. Woke up saturday to find a fresh 4 or so inches on the ground. Headed back to the farm with the plow truck (have to keep some roads open for upcoming family sledding party reunion!!!) All the tracks I found, including those of me and my girlfriend were totally filled in.

Attempted some scouting but all I could find were some drag marks in the snow on known travel routes. Figured they were deer. The girlfriend and I built 3 ground blinds in the pine stand we have hoping I can ambush one from the ground with the right wind after the new year. Went back this morning to plow and found some fresh tracks. Looks like they passed by the trail camera but the lens was covered with snow so all I had was confirmation that something set it off at 8am or so. Guess that's how it goes.


Hodag you should have been fishing yesterday. Put tip ups out in the sideways wind and despite a frozen spool and the flags freezing down in the slush we managed to get 4 drops, 3 walleyes and a bite off. Was a good saturday minus the opportunity to scout because all the tracks were filled in :/
"The history of the bow and arrow is the history of mankind." Fred Bear
Top

I was tracking and also scouting with my muzzleloader. Now the snow is too deep unless you use snowshoes. I'm going out to check an area eithor tomorrow or tuesday. I'll be looking for big tracks (it will be real hard to tell in this deep snow). If I can find anything good I will backtrack to where I believe bedding is. I will pick out some stand locations and probably watch from a distance to see what comes thru. If I can find a shooter it's game on.
Misty River Trackers base camp : https://www.facebook.com/groups/307702256717984/

i am going out tomorrow (today) about noon time. i have been waiting for the snow for awhile now! i was wanting a good snow and then to wait about 5 days or so to see where the true "highways" were. BUT it is slowly melting so i figured i would go out tomorrow and look for some trails leading into crop fields. set a cam or 2 on those trails and take a mental image to sit with my bow 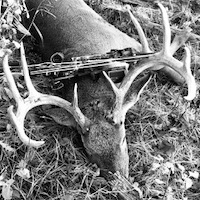 2 years ago scouting some public ground in snowshoes, cut a large set of tracks and followed them into the cattails not 100 yds from the road. this deer was sitting with a pond on one side and could watch the road, parking spot and hunters walk right by, N,NW wind was to his advantage, and that is how he had bedded that day. If anything bothered he just ran out the back door and across the road. Was cool to see... set up on him late december that year, did not see him though.
Top
Post Reply
9 posts • Page 1 of 1