The Extinction Of The Large Trout

The Extinction Of The Large Trout 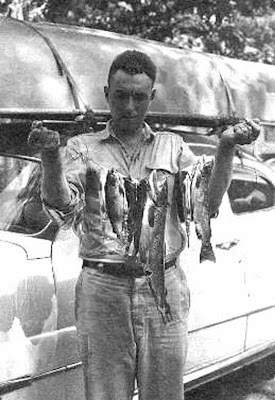 I have trout fished for 49 years and I have personally seen the many transformations of Trout Management in Wisconsin. In the early days the battle cry was: “Limit your kill, Don't kill your Limit.” This seemed like a very appealing alternative to what I had seen in the early days. I observed many anglers back in the 60s that limited out every time they went out and they even took young family members along so they could double or triple their limits. The views of stringers with 30 trout on them were revolting to me.

The thing that even burned me more was the same people would go back to the same stream 2-4 times a week and harvest 30 each outing. A family could easily decimate a trout population in a single season. My father always told me to not be a fish hog and to only harvest what I could actually eat. The 30 on a stringer crowd took many of those trout home and they eventually were thrown away due to freezer burn.

The Wisconsin Department Of Natural Resources changed the regulation a while back to five trout a person from ten each. This seemed like a logical move to conserve and protect the trout population. They even made a few streams catch and release only and no bait also. I questioned the wisdom on these types of stream 15 years ago.

The conservation effort paid off in my home waters. There were many streams that did not hold a natural reproducing population of trout back in the old days that had a booming population. “This Limit your kill, Don't kill your Limit.” was paying big dividends I was on board and singing its praise.

I started using a Yearly Log Book back in 1975. It told me the streams I fished and the weather conditions on each day I fished. The log also told me how many trout I caught and their sizes. I average 120 days on the trout stream yearly since 1980. By 1995 my success on stream had doubled from my early 1975 log books. The average size of the trout was constant. I thought that more trout and still big ones is great. This is really working well. The Wisconsin Department Of Natural Resources really seems to have the right thinking going on here. When they changed the limit in my area from five to three a few years back I was in support of it.

I use to be a keeper of large trout to put on my wall. I loved showing them off. Nine years ago my wife told me that the only way I could put another trout on the wall is for it to be bigger than what is on there already. I have not mounted a trout in nine years. I have continued to fish the same amount of times yearly also. My numbers of trout have increased each year.

Two years ago I was fishing with a friend and he caught a nice trout. It was obviously going to die but he insisted on releasing the trout. He said: "It may live and I want to give it every chance to make it." I respected his wishes and off we went upstream. We walked back the same way. Out in the middle of that hole laid that big trout dead. I asked him if he was going to wade in and get it. He looked at me in disbelief. I waded over my waders to get the trout. I told him I was going to take it home and grill it. I do not believe in wasting trout.

I drove home and we talked all the way there. This angler had been trout fishing for 10 years and NEVER had harvested a trout. He watched me clean the trout at home and wanted pointers on how to do it because he had never cleaned a fish before. Finally he took it home with him. He called me the next day and told me that he grilled it and it was excellent.

Catch and Release period is not the solution. Sure the population of trout have skyrocketed in the area since the groups have gained influence. I went back to my log books and evaluated my logs again. Yes I know that it is unscientific but most people make their decisions on their own life experiences. Although the trout population has double since the 1970s here, the average size of a trout has shrunk yearly and has continued to shrink even more dramatically in the last 5 years here. I have thought long and hard about this and conferred with many other anglers. It is a trade off. There will be fewer big trout but there will be more little ones. More fish in the waterway means more competition for food. Less food means slower growth rates and eventually a large trout in the Wisconsin Driftless Area will be 16 inches and it will be illegal to keep any if the conservation groups have their way. This is not conservation this is elimination of the large trout and the anglers that love the taste of trout. I am glad the Wisconsin Department Of Natural Resources has educated fisheries staff that see the error of the Catch and Release, period mantra.

Keeping trout is essential if you want to maintain a nice size structure....ie-bigger fish. Once population is allowed to grow unhindered the competition for the forage base is more extreme. It doesn't take a PH D to figure out that if your population is double what it once was your fish growth will be stunted due to competition.

I enjoy a trout meal of 9 to 11 inches multiple times a year as well. I am member of TU here in SE MN and most guys feel as I do.

Blanket regulations do not work. Individual streams have different ecology and need to be managed accordingly.

Great post Len!! I loved to trout fish when I was younger with more time on my hands. With lifes changes I just don't have the time to get out anymore. Believe me when time allows I will be back into the trout fishing like never before.

Dor wrote:
Blanket regulations do not work. Individual streams have different ecology and need to be managed accordingly.