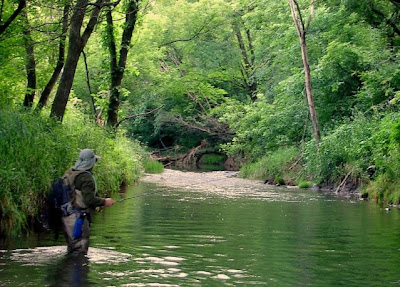 Last spring I suggested a good stretch to my buddy Andy to find some sizable brook trout. I thought for a while and decided some native small stream head water brookies were what Andy needed. The last time I fished the area that I sent Andy to it was maybe 2 years ago. This stream really got skinny near the top. I stopped about 250 yards from my intended final destination. I decided anything in that skinny of water was tiny and not worth the extra effort. I love to search the headwaters of streams the last weekend of season.

I typically don’t fish for brook trout. They don’t really have the size that I like. A big brook trout from this area is anything over 14 inches. I typically don’t get the adrenaline rush I require from a fish under 16 inches. This pretty much eliminates 99 percent of the brook trout from Southwestern Wisconsin. Brook trout are not as selective as brown trout and actually have gotten a reputation of being “stupid” and too easy to catch.

Andy called me from the stream. He was really excited and was babbling about a ENORMOUS female brook trout he had within 3 feet of him and it had another almost as big male brookie with it. I asked Andy for details.

Andy had gone upstream of where I stopped fishing on the brookie stream. He told me it was obvious that the recent floods from the last couple years had scoured the stream and had made some serious holes. Andy told me exactly where the brook trout was. He asked me to not tell anyone and “he” wanted me to go back with him to help him land the monster brookie. We planned it for that Tuesday.

We hit the water bright and early. Andy and I are fishing our way up to the area where “Andy’s” brookie lives. We are just pounding the brookies and browns. I could tell we were getting close to where the massive brookie lives. I could tell because Andy was walking faster and spending less time at the holes we were fishing. I decided to assure Andy that he discovered the brookie and it was his to catch.

Just before we got to the hole we made a battle plan. Andy changed his leader from a 5x to a 4x and checked the new leader thoroughly for nicks or imperfections. The hole was not that deep but it was long. Andy did not realize that brookie was in the hole the first time he fished it. Andy landed maybe 10 trout in the hole and thought it was done and walked up through the hole to go to the next hole. The huge female brookie and its friend were at the very head of the hole in the shallower fast water and they had nowhere to go and came directly downstream to Andy and held still on the bottom no more than 3 feet from Andy. Andy told me he watched the two brookies in the gin clear spring creek for 5 minutes before he moved and spooked them. The female brookie was wide backed and was pushing 20 inches and its partner was a 17 inch plus male brookie with a huge kype. 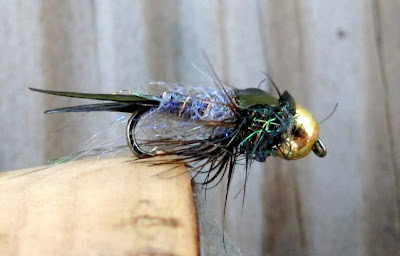 Andy put on lite brite biot bug to fish the hole first this time. His first cast he landed a 17ish inch brown. The brown really was a strong fish and ran all over the hole and the hole was now a huge cloud of dirt. The brown had spooked all the other trout in the hole. 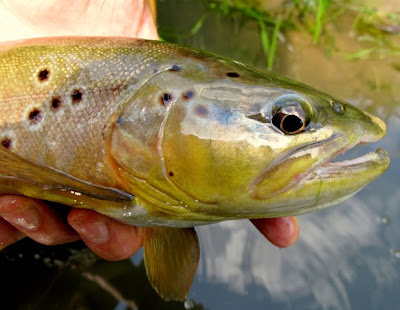 We decided to let the hole clear. It didn’t take long and the hole was clear. We decided to let it calm down even more. We waited 15 minutes to make the next cast. The second cast Andy landed a decent brook trout. 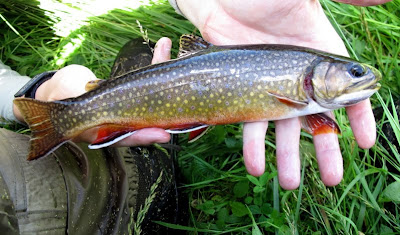 Andy casted another 35 casts with no results. He then gave up the hole to me. I casted 20 times and not a whisper.

We covered the entire hole and changed presentation and offerings numerous times. We decided it must have moved upstream. On we went to the next hole. We were in the water and the exact same thing happened to Andy and I as did to Andy the first time. The two big trout were at the head of the hole and spooked downstream to us. The big female stopped and hugged the bottom one foot from my feet. I looked at her in awe. This old gal was wide across the back and was 20 inches minimum. Her partner laid right next to her and he 17ish male brookie. I watched him and saw him open his mouth once. He had a huge kype..We watched them for 5 minutes and then backed off the hole and gave it a 30 minute rest. It didn’t work. Andy and I went back 5-6 times to the hole through the year with no results.

About 80 yards below the hole the two monsters lived in I ran in to a huge beaver dam. It was new and was built during the closed season. All the holes had changed upstream of the beaver dam. 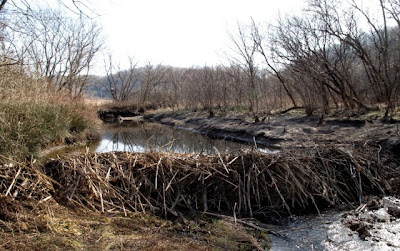 The big brookie’s home was completely changed. I fished this stretch the minimum of 25 times this year. I bet you know where I am going to fish 2011 opener.

sounds like a great spot for the opener, Len. There's something about a big brookie...

yes! good luck for the opener next year

, this year i didn't get to do nearly enough trout fishing, they sure are beautiful
When better is possible, good is never good enough
Top
Post Reply
3 posts • Page 1 of 1