buckeye wrote:The highest scoring buck I have passed would have been a little better than 140. He had a great frame but was pencil thin. I have passed 40-50 opportunities at bucks in the 130-135 range. We get one buck tag in Ohio and won't shoot something I would later regret.

Like I said in another thread today, I don't have a set score criteria for what I consider a shooter... It's much more of a look thing than score thing.

Definitely agree with the look thing. If I'm debating for more than a few seconds, he probably isn't up to standard. 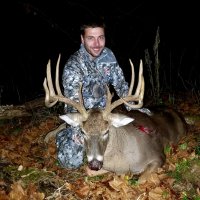 buckeye wrote:The highest scoring buck I have passed would have been a little better than 140. He had a great frame but was pencil thin. I have passed 40-50 opportunities at bucks in the 130-135 range. We get one buck tag in Ohio and won't shoot something I would later regret.

Like I said in another thread today, I don't have a set score criteria for what I consider a shooter... It's much more of a look thing than score thing.

Definitely agree with the look thing. If I'm debating for more than a few seconds, he probably isn't up to standard.

You are exactly right. My personal rule is if I have to think about it or if I have a second thought I'll save my tag for another day.
.
Instagram.com/buckeye_archer
Top

I passed this one the first time I saw him in range. Then he came around me again, and I re thought my previous decision to pass.

Are you happy you shot him?

Are you happy you shot him?

Passed 2 separate 120s/130s bucks last year. Because Indiana is a 1 buck state, and I am after one that is I don't know how big, but definitely over 160s at least I'd guess, I'm not shooting anything else. As it is now, I won't shoot a buck unless I plan to mount it. That personal rule may change someday but not for now.
"One of the chief attractions of the life of the wilderness is its rugged and stalwart democracy; there every man stands for what he actually is and can show himself to be." — Theodore Roosevelt, 1893
Top

Biggest were both right around upper 140s.... one was 3yr old the other was a 4yr old with monster potential, so I took a pic of him at 8 yards and showed the landowner. I passed a busted 10pt this year at 10 yards... had he been all there he was 145". It is getting easier to pass and harder to find a "chooter"
"When a hunter is in a tree stand with high moral values, with the proper hunting ethics and richer for the experience, that hunter is 20 feet closer to God." Fred Bear
Top 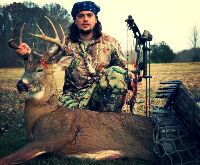 Does and spikes are all I've passed..it's a start

I've passed on a lot of 1 and 2 year old bucks. I try to hold out for 3 year old buck or bigger. My biggest buck that I passed on was 3 year old 10 pt that might of pushed 125. I didn't like the shot that he presented to me so I decided not to shoot. I watched him for a good 45 minutes from the stand as he slowly worked his way towards the field all I could say was another year and that thing is going to be a good buck.
Top

I have accidentally passed a couple of really big bucks because I didn't realize how big they were but that doesn't count because if I had known I would have been shooting. The more I hunt the more I realize that most of the "140 inch deer" I passed when I was younger realistically would not break the low 130s. A 140 inch deer is a REALLY nice deer...and a 140 inch 8 point is a toad. This past year I passed a mature 8 that was in the low 130s and in hindsight should have shot, didn't realize he was mature till too late.

I did pass one incredible 2 year old that had a typical 10 point frame with split brows once...he was very close to 140 gross. The next year as a 3 year old he would probably gross above 170, then he disappeared.
Top

I passed a 120 inch buck last year in Ohio .
I passed him because there were a handful of bigger bucks working the area. I wasn't rewarded. I haven't shot a bunch of big bucks in my life. I have 5 ranging from 100" to 135".
I will say that I did shoot my first buck in 5 years last December and it was also the latest in the season I ever shot a buck. Scored 117" not a monster but I'm hoping he will be the end if long droughts.
By the way I hunt in Michigan and take one week to hunt in Ohio and hopefully some other states in the future 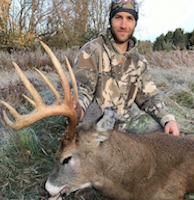 In 2012 I passed on a 140" 10pt the first week in October. I drew back on him at 33 yards, perfect quarting away shot, but the wind was so bad I just couldn't take the shot. I wanted to shoot, but didn't think I would've made a very good shot and choose to let him walk. I was happy with my decision and felt no regret for not taking that shot. Two weeks later on Oct. 15th, out of the same treestand, I shot a bigger buck, which is the buck in my avatar pic.
Top

In my original post in this thread I said I passed on bucks in the 120's. Since then I have passed on a few in the 130-140 range only because I didn't like the shot angle. I'm pretty picky about my shots and probably have missed out on killing quite a few good bucks because it this. In the end I feel better not forcing them and possibly wounding a deer. 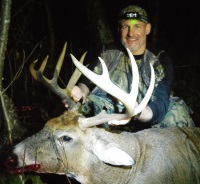 I have 4 bucks that come to mind 1 with a gun, 3 with my bow that I passed up on that would have been bigger than anything I have shot to date.

All were passed up on due to fear of shot placement etc... I am not the greatest at scoring on foot mainly because it rare for me to see a lot of deer over 100" in any given season.

One was a 10 pointer that hopped out into the field edge during gun season, he was at a fast trot about 80 yards out. I could not pick him up clear enough in my scope mainly because of nerves and he was moving away from me off my right shoulder... so I passed...

The 3rd was a nice 10 pointer that came into the thicket in front of me at 25 yards. He came in with a smaller 7 pointer that made his way right under my stand. Of course the bigger 10 kept his distance behind a tree blocking a shot at his vitals. I watched him eventually walk down the ridge and cross the creek to my right. I got a good look at him from the back, and it still seems like yesterday when I think about it. Again if I was more aggressive I probably could have take the shot... But a week later during gun season one of the handicap hunters took the buck... what ended up being the biggest buck of his life and one of the best on the property to date... so in my mind it was meant to be and I have no regrets

here is the buck:

We played a cat and mouse game as he stared up at me right underneath my stand... Yeah I am still kicking myself for not having my bow in hand

He made a move away from me but was in my shooting lane, I attempted a grunt to get him to stop, but it had the opposite affect and he bolted further into the thicket.
What I learned is I should have been more aggressive and taken the shot right as he was moving into my shoot lane at 15 yards without trying to stop him. He was only at 20 yards at that point... I was not expecting this buck to appear when he did because it was early in the afternoon and I was not expecting him to be on his feet so early. I got him on my buddies trail camera a few days later... but never saw him in stand again that season.

I guess I have learned from all these bucks to be aware of all my potential shot placement areas once I get in stand. Especially when hunting a new area with a mobile set-up. Now I often visualize the different areas a deer may enter into my shoot lanes, and play the hunt through in my mind. I think these experiences allowed me to make a good shot on the buck I killed last season. All in all no regrets... they all were fun hunts.

What if anything have others learned form the "ones that got away"?
Top

Not sure if this counts but I've passed up 2 big half racks. First one was in 2007. He would have scored 130s. The other was last gun season. He would of scored closer to 145. Neighbor had picks of buck and found the shed.

Users browsing this forum: No registered users and 15 guests