I would shoot the 145. Chances at a deer like that don't come very often for me.

That's a pretty tough question. I would like to say I would pass on the 145" but I guess it would take the actual situation for me to make my decision

The 145" would be bigger than my biggest buck, so I would put my arrow thru him and hope the bigger buck makes it thru till next fall.
Top

It's hard to come by a 145" here in MN. I'd take the smaller one. You know what they say about a hand and a bush?
Top

Like alot of other people have said it depends on where I'm hunting and how much time I have left to hunt that particular buck. If I know he was a buck that had traveled in from a couple properties down and probably won't have another chance I'd take the 145".
Top

AC Rider wrote:It's hard to come by a 145" here in MN. I'd take the smaller one. You know what they say about a hand and a bush?

Im whackin the 145 if hes mature 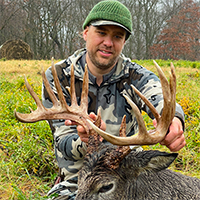 So situational for me. It depends so much on how I am feeling with the situation and what went into it. Not that it was the same situation but last year I had already shot a nice buck in MN so I was going to be very picky in Wisconsin. When the 10 pointer I shot first came in to my rattling I wasn't sure I was going to shoot him. I was sizing everything up on his rack, mainly looking at his G4's and then I noticed the one broken. Ultimately his massive body and indicated age class along with antler mass sealed it for me. I think I spent more time sizing up his rack than I did any other buck I have shot but I couldn't tell you within 10" on either side I would have thought he scored while I was in my tree.

It could really go either way for me, I could see passing or shooting the 145", really would depend on the moment.
Top 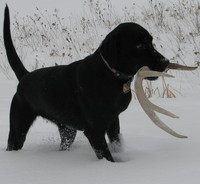 I'm in the same boat as Rutin. The only other factor that would come into play would be: do I recognize the 160" or is he just passing through. Random buck sightings during the rut are fun but you can't always count on that buck being in the same section by the next day.
Find his shed, find his bed, use your head to make him dead.
Top

Now if that day was over with, and I didn't get anything cause the plan backfired, you better believe I'm shooting the next 145 I see!
A buck will see you three times, and hear you twice, but he's only gonna smell you once.
Top
Post Reply
60 posts