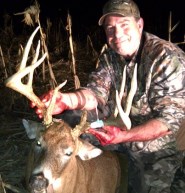 Had an awesome hunt! Shot my 3rd gobbler ever and I called him in with a mouth diaphragm! It was as HS raspy old hen call. That was my 1st time ever calling one in on my own and it was awesome. I had gone out before daylight & set up with my decoys in an area with no action so I decided to go to a whole different area and hike way back into a deep swampy woods where I know a lot of turkeys roost. Got way back in there and about got lost it was so thick. Then I thought I heard a gobble way off on the next farm over so I sat real quiet for a minute and heard him again, just barely, so I made the absolute loudest 3 cluck call I could make and he responded! I quickly moved to an area where there was a little bit of a clearing so I could set-up my decoys in it and then I backed off and to the side to sit at the base of a big double trunk tree. Over the next 10 minutes it was me clucking with a few key keys here and there and him closing the distance gobbling every time I called. When he got probably inside 100 yards, he started circling me to my left and got quiet, so I stayed quiet for a couple minutes and then let out a couple real soft clucks and he gobbled big time from about 50 yards away, further to my left and in some really thick stuff, so I swung the gun around and strained to see anything. Then I saw him in bits and pieces from about 45 yards out and at 35 yards he appeared between a couple trees and I smoked him! I was using my 870 Remington 12 ga and a Remington 3”mag, 5 shot, Express turkey load. He had a fat 9.5 in beard, 3/4 in plus spurs, a big fat snoodle and he weighed in at 22 lbs.

Here’s the video from right after I got him:

Lay of the land:

Taking care of business, breasts in the freezer, wings, fan and spurs in some borax. I will send the wingbones to NCturkey to make calls out of.

Congrats! I really liked the video.Glad to see you do it on your own! Pretty exciting huh?
A buck will see you three times, and hear you twice, but he's only gonna smell you once.
Top

Congrats on a fine bird!!!!
For God so loved the world, that he gave his only begotten Son, that whosever believeth in him should not perish, but have everlasting life.John 3:16 KJV
Top

Thanks! It was a blast!

Glad to see you here MrJ

Great job on the bird, and enjoyed the pics too.

Awesome MrJBF, really liked the excitement in your story!!

That's my exact set-up, grandpa's old gun and it's on 8 dead birds without a miss

I do have a pair of Allen sights on the rib & a grim reaper extended choke tube. It works well!