Bow hunting, how far will you shoot ?

As many people on here have said practice is done out to 60-70 yds. When shooting at wild game that is constantly using all of it's senses to detect predators like us, I try to keep my shots under 30 yds even with a "modern bow" and arrows. Where I hunt in hill country and even the some river bottoms most of my shots are maximum of 20-25 yds, which hopefully is a chip-shot!

Good discussion, the most civil one I think I have ever seen on this topic

As has been mentioned by more than a few others how far I am going to shoot is situational. Alertness, wind, my confidence, all are important. I have taken some very difficult shots...and made them...only because I knew I would. I also have passed many easier shots because I wasn't sure of myself. Shot judgment can only develop with experience and some serious bouts of soul searching!

Dan that's a good point about the ethical shot distance to an animal being relative. Lets face it, turkeys bob around so much that if hunters held themselves to the same standard they bowhunt deer with, they probably should not shoot beyond 10 yards in most cases. I bet most people's archery turkey shot to kill ration is far lower than their deer shot to kill ratio. Same with coyotes. And basically all small game. That applies to me too unfortunately.

My longest shot I have taken was at 41 yards on a buck. I got him, just barely within the kill zone though clipping the lungs. I try to be very picky about shots....the few major screw ups I have had, since that first few year learning curve, have all been within 25 yards and were a result of lack of focus because it seemed "easy."
Top

dan wrote:Seems to me, there is somewhat of a learning curve for the beginners that goes beyond just know what range or distance to shoot. Shooting a mature buck with a bow is not an easy task at any range for a beginner. A lot of us take it for granted knowing when to pull the bow back, when to release the arrow, when you can and can't move, Whats to far, when is he to close, etc.
Its not that easy for a beginner. Thoughts are racing thru a beginner, or a person who has never shot a big buck. He lacks the confidence it takes to make a smooth shot and is likely very nervous.
My biggest suggestion to a newbie would be to kill some deer. Don't wait for the big one. Work your way up. Killing itself takes skill and there is a learning curve. Shoot when you know you will kill the animal. And you will probably still wound one sooner or later. But push your limits and you will likely be disappointed more often.

I know this is from a page or two back on the post, but this is exactly where I am at. I have invested so much time into scouting and learning everything I can about deer, I never considered how hard it is to make those last few moves to seal the deal. I got lucky last year and had a decent buck walk in about 5 yards from my tree. I was shaking like a leaf and made a less than impressive shot, but it got the job done. It wasn't that I had practiced, but I just don't know of a good way to simulate what goes through your head when you are trying to seal the deal.

My whole mentality now is to shoot any antlerless deer that I get on, but I will hold out of a 2.5+ buck. Plus living in the CWD zone an antlerless deer = another buck tag!
Top 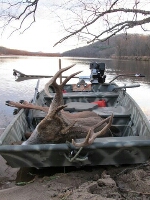 true hunting practice should always be with broadheads that you will be shooting for hunting. also done from a treestand/groundblind and if done in the woods(your terrain) at around last/first hour legal shooting light. The low light we operate in dense early season woods with leaves still on , limbs hanging low, makes for tough shooting alot different then a wide open back yard range. Sometimes its harder to see a limb with no leaves on too. I for one shoot field points better than broadheads at 50-80 yards .I burn up a broadhead target quickly every year or two. That being said i hunt pressured whitetails 30-35 max on good condition days 10-25 is perfect . Elk kill zone is bigger not as much string jumpers ive been told and setting my max at 50 this year for that. I have enough KE but im relying on trusted friends that have Elk hunted before. I love shooting a bow thats why i practice and way beyond what i need for hunting but my hunting practice i replicate everything i can from smooth draw, to visualizing my spot, etc
Top
Post Reply
80 posts